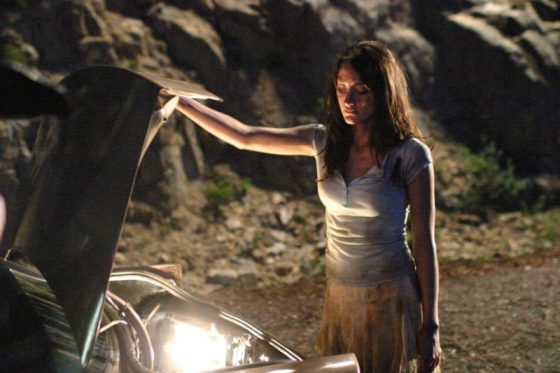 Since it’s October, you’re pretty much obligated to watch at least a few horror movies and TV shows and one of our favorite horror TV shows ever here at Everything Action is Masters of Horror, all of which is now on Tubi TV.

Episode Title: Incident On and Off a Mountain Road

Did I Know Anything Going In?:  Chris introduced me to a bunch of random episodes in college, although he cherry picked the most insane/ridiculous episodes, like the racoon fueled madness of Pelts.  I never saw this first episode until this week.

In case you’re not familiar, Masters of Horror was an anthology series that aired for two seasons on Showtime back in the mid-2000’s.  Created by Mick Garris, who directed Sleepwalkers and The Stand and also wrote Hocus Pocus and Critters 2, the show, as the title suggests, gathered famed horror directors like Dario Argento, John Carpenter, Stuart Gordon, Joe Dante, John Landis, the late Tobe Hooper and more to direct each episode and the show covered almost the entire swath of the horror genre with everything from vampires to zombies to cults and more.  This first episode, “Incident On and Off a Mountain Road” (which, side bar, is a inelegant mouthful of a title) was directed by Phantasm director Don Coscarelli and includes his star Angus Scrimm.

Based on a short story by Joe R. Lansdale, who also wrote the novella that inspired Bubba Ho-Tep (another Don Coscarelli joint) and some of the best Batman: TAS episodes like “Perchance to Dream”,  Incident On and Off a Mountain Road stars Bree Turner, who was completely charming and fantastic as Rosalee on Grimm, as Ellen, who is driving on the titular, isolated mountain road when she gets into an accident with an abandoned car.  Getting out to investigate, she sees blood all over the seats of the other car and sees a shadowy figure that turns out to be a giant backwoods killer called Moonface (John DeSantis, who played Lurch on the 1998 Fox revamp of The Addams Family among other things) dragging the young woman who was driving that other car.  After a brief fight on the road (including an extremely dated Underworldesque shot of Moonface jumping onto the road in front of the full moon in slow motion), Ellen flees into the woods but, as revealed in flashbacks throughout the episode, she was married to a paranoid survivalist named Bruce (Ethan Embry) who drilled survival and combat tactics into Ellen but he eventually went way too far and crazy (but we’ll circle back to that later).  With these skills, Ellen actually is not the typical “last girl” or helpless horror victim and actually puts Moonface on the defensive for the first part of the episode, crafting Ramboesque improvised traps using sticks and things in her purse, like a sharpened nail file arrow that shoots out of an improvised bow, although that doesn’t work out quite as she planned as she takes the file in the shoulder after Moonface catches up to her but she still manages to escape his clutches.

Ellen eventually gets to Moonface’s cabin and sees that he’s got dozens and dozens of “scarecrows” that are previous victims he propped up on crosses after drilling out their eyes and the shock is too much and she passes out and wakes up in Moonface’s basement.  She finds there’s another prisoner in the basement, an insane old man named Buddy (Angus Scrimm) who goes on and on about singing songs and wanting candy.  Moonface comes down and drills out the eyes of the other young woman he was chasing earlier, who had accidentally fallen into a pit that Ellen had rigged up with a punji stake type trap.  Buddy points out after Moonface is gone that Ellen still has the file in her shoulder and she manages to pull it out with her teeth and gets into a final battle with Moonface where she does some badass knife moves and kicks him out the window into a massive ravine with a river far below and Ellen makes it back to her car, which miraculously starts back up.  If the episode had ended there, it would have been a much more satisfying and triumphant ending but unfortunately, there’s a final twist where we find out Ellen killed Bruce after he raped her and was carrying his body in her trunk.  She takes his corpse back to Moonface’s cabin, drills out his eyes and puts him up in the yard and then shoots Buddy in cold blood before getting back on the road.  It’s a pretty blatant attempt to be edgy and shocking but all the sympathy and support you’ve built up for Ellen is almost used up with these final two bloodthirsty moves and the whole rape thing is unnecessary as well, we already saw Bruce was a paranoid asshole and Ellen was leaving him, the rape scene is a step too far and it also doesn’t seem to line up with the timeline of the flashbacks up to that point.

So yeah, the episode goes on for 10 minutes too long and tries to be too shocking but the rest of the episode is a solid twist on the old “backwoods killer” genre.  There’s a feel of older classics like Texas Chainsaw and The Hills Have Eyes but it also has things that would be seen in later horror entries like See No Evil, which premiered the year after this episode in 2006 and You’re Next, which has the same tables turning on the killers idea.  Bree Turner is great and John DeSantis does a solid brutish killer and his look is simple but still pretty scary.  This episode definitely got things off on the right foot for Masters of Horror, although things would fluctuate wildly as far as quality goes as the series went on (like the aforementioned Pelts, oh boy).  If you’re looking for something to watch during this spooky season, definitely head on over to Tubi and check out some Masters of Horror, or any of the other horror movies they have featured.