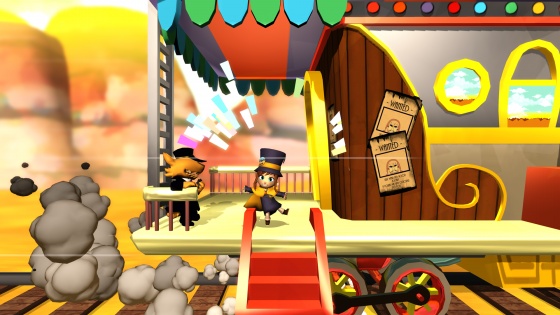 In this edition of Gamebox 2.0, we got to check out some spooky games just in time for Halloween, a new survival game with a Wild West theme and a fantastic, charming love letter to the Gamecube era of platformers.

A Hat in Time: Developed by Gears for Breakfast and published by Humble Bundle, A Hat in Time is an utterly charming, fun as hell platformer that calls back to classics like Mario 64, Banjo Kazooie and Psychonauts as you take control of Hat Girl, who travels the galaxy in a kid friendly spaceship and protects a vault full of time altering devices. A mishap with the Mafia results in the time devices scattering across five different worlds and Hat Girl needs to set out to find them all before they fall into the wrong hands.  Hat Girl can sew herself new hats that give her different abilities and you can switch between the hats on the fly and also enhance them with badges you buy from a creepy, glitched out trader.  The worlds Hat Girl travels to are all unique and hilarious including Mafia Town, movie studio Dead Bird Studios run by two rival bird directors, a spooky forest and more.  The game has a fantastic sense of humor and is always throwing something or someone new at you and the voice acting and music are top notch as well (the music is co-composed by the legendary Grant Kirkhope).  The game blew away it’s Kickstarter goal and it’s easy to see why because it’s an absolute blast to play and if you’re fan of those classic platformers from the N64 and/or Gamecube, this is a must play.

Party Hard Tycoon: Out today (10/19) from tinyBuild, Party Hard Tycoon flips their fantastic Party Hard games, where you played a psychotic killer trying to murder people in creative and stealthy ways. Party Hard Tycoon puts you in the shoes of a party planner and you need to figure out the perfect mix of theme and accessories to pull off the ultimate rager.  You can hire different personnel like an MC to hype people up or a biker to beat people up and steal their money and you unlock more themes and locations as you level up and progress.  It’s a lot harder than you might think to throw a killer party, as you have limited space in each venue and have to make sure there’s enough tables/food, that the music is pumping in enough areas and figure out the proper admission rate in order to make a profit.  The game has the same pixel style as the Party Hard games and it’s a fun and interesting way to reuse those game assets for something new.  If you think you have what it takes to throw the ultimate party, definitely check out Party Hard Tycoon on Steam.

Sunset Rangers: The latest entry in the incredibly popular survival sandbox genre, Sunset Rangers plops you into the deserts of the Wild West and lets you do basically whatever you want as a wide range of different classes, which range from the classic, simple gunslinger to the more complex builder or blacksmith, which give you access to the building and crafting systems of the game, where you do things like chop down trees and collect minerals to be able to build newer and more advanced tools and weapons.  If you played ARK or Conan Exiles, this is 100% in that vein but with a Western theme, although it’s in Early Access right now on Steam and kind of rough and also a little sparsely populated and I ran into some crashing/freezing issues.  I’ve said before but this genre isn’t really my thing because I don’t really find the slow build up of resources and then crafting things fun but the Wild West theme is an interesting idea for the genre and definitely lends itself to the “do whatever you want” ideal of these games.  If you want to check it out, it’s in Early Access right now on Steam.

Inmates: If you’re looking for something spooky to play for Halloween this year, Inmates is an interesting entry in the horror genre created by developer Davit Andreasyan.  You play as Jonathan, who wakes up in a creepy, disgusting prison and has to figure out how he got there and what is going on.  Unlike contemporaries like Outlast (which I’ll talk about in a bit) or Amnesia, Inmates is much more puzzle based, there aren’t really a lot of enemies to hide from and it’s much more about exploring and trying to unravel what is happening based on notes and clues you find scattered around.  The puzzles are extremely well thought out and do a great job of using environmental clues and they are the perfect blend of tough but not impossible.  The game is fairly short at about 2 hours but that also means you can easily play through it in one session.  One minor nitpick is that the voice acting is not the greatest and took me a little bit out of the creepy atmosphere of the prison a little but it’s not bad enough to tank the game at all.  If you’re looking for a quick, spooky game for Halloween, check out Inmates on Steam.

Stranger Things: The Game: To get ready for the imminent second season of Stranger Things, Netflix had developer BonusXP, who have made games like The Incorruptibles and Hero Academy 2 for mobile, to make a retro style Stranger Things RPG for iOS and Android.  Initially starting out as Chief Hopper, you make your way around Hawkins to try and find Will, Mike and the rest of the gang and each time you find one of them, they join your group and provide some new ability.  The game looks great, it seems like it jumped right out of a SNES and it plays fine on a mobile device (although a Steam release I could play with my 8bitDo SNES controller would be amazing).  The music from the show has also been translated perfectly to 16-bit and there’s a fun thing where a bit of the theme song has been turned into a Zeldaesque chime whenever you solve a puzzle or get a key item.  The game is free and there doesn’t seem to be any sort of microtransaction nonsense, so you basically have no reason not to check it out if you are a fan of Stranger Things and old school action RPGS.

Outlast: A little while ago, Humble Bundle gave away the first Outlast and it’s DLC for free and, having never played it, I definitely jumped on it and checked it out on Steam.  You probably already know the deal with Outlast but in case you don’t, you play as an investigative reporter following a lead about illegal, horrible things happening at a nearby mental hospital and when you arrive, you find things are much, much worse than you thought and you have to escape the crazed inmates running loose.  The main gimmick that got Outlast a ton of attention when it first came out was your video camera that your character uses to gather evidence and also uses the night vision to navigate pitch black areas of the hospital.  The night vision rapidly drains if left on constantly and there’s only a few scattered batteries around to recharge it, so there’s a lot of using the night vision in quick bursts and then moving forward in the blackness, listening for lunatics who are stalking you.  There’s definitely a lot of good jump scares and also some thrilling, parkouresque action sequences as well that I wasn’t expecting where you run away from crazies by jumping desks and through openings in the wall.  The Humble Bundle deal is unfortunately over but if you’ve never played Outlast like I hadn’t, it’s still definitely worth checking out and it’s probably fairly cheap as the sequel has been out since April this year.