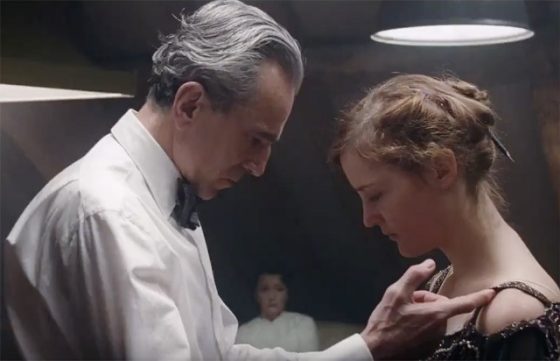 Having announced his retirement earlier this year, Daniel Day-Lewis’ final time on screen will be in limited theaters on Christmas Day as he reteams with the also legendary Paul Thomas Anderson for Phantom Thread.  Set in post-war 1950s London, Day-Lewis is a renowned dressmaker who works with his sister Cyril (Lesley Manville) to provide high end fashion to movie stars, socialites, heiresses, etc but Day-Lewis falls for someone much lower in the social scale than his clients, a waitress named Alma (Vicky Krieps), who becomes his muse but also provides the kind of drama that gives Oscar voters hard ons.  Really, is there any universe where this movie is not going to sweep the Oscar nominations and probably the actual awards themselves next year?  Especially if it’s truly the last time Daniel Day-Lewis will be on screen.  It’s definitely not the kind of subject matter or story that most of us here at Everything Action would be into but it seems too important to not mention.  Check out the trailer below.