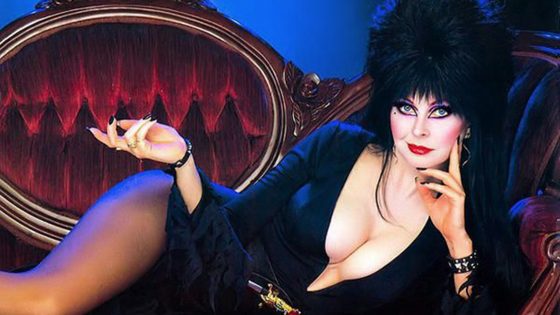 Although recently appeared for the last time at Knott’s Berry Farms Halloween event, Cassandra Peterson aka Elvira will always be everyone’s favorite Mistress of the Dark and Queen of Halloween.  Elvira has dominated pretty much every form of pop culture you can think of; from her TV show Movie Macabre to her own movie to tons of commericals, toys, comics, pinball machines, cameos all over the place and, most relevant to us today, her albums.  Elvira has 6 albums released during the 80’s and 90’s that featured original songs from the Mistress along with Halloween related songs from other artists, like Ray Parker Jr and Alice Cooper, and we previously featured one of the songs, Monster Rap, but there wasn’t an official music video.  “Trick or Treat” definitely does have a music video and it’s cheesy and fun in the way that all things related to Elvira are, although I’m not sure what album this actually from or if it’s just some crazy one-off from 1985 but, either way, you can check out the video below.