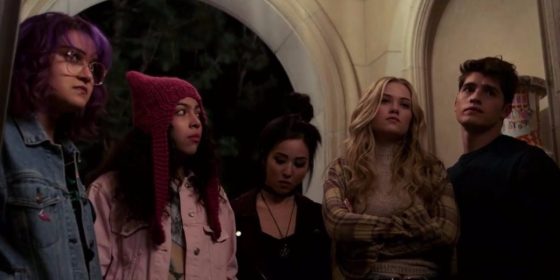 Coming at the end of next month on Hulu, Runaways is the MCU’s take on Brian K. Vaughn’s beloved comic about teenagers who band together and go on the run when they find out their parents are all supervillains.  The Runaways are Alex Wilder (Rhenzy Feliz), a child prodigy, Nico Minoru (Lyrica Okano), a witch with magical powers, Karolina Dean (Virginia Gardener), an alien who can fly and manipulate solar energy, Gert Yorkes (Ariela Barer), whose parents were time travelers and she has a telepathic link with a dinosaur named Old Lace, Chase Stein (Gregg Sulkin), who has access to powerful gauntlets called the Fistigons and Molly Hernandez (Allegra Acosta), who has superstrength and invulnerability.  The show still seems mostly like a Gossip Girl/Riverdale angsty drama but there’s some more shots of Old Lace and Nico using her magical staff so hopefully the actual show is more balanced than the trailers have been.  The show starts streaming on Hulu on November 21st and you can check out the new trailer below.

The MCU Goes Full CW With The Runaways (Trailer)