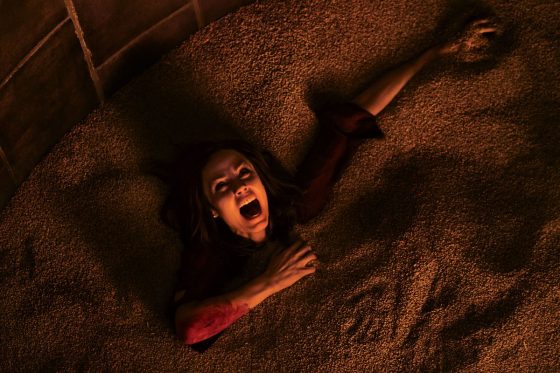 After seven years since the supposed Final Chapter, Saw is back with Jigsaw but it’s a disappointment to longtime Saw fans and probably newbies as well.

A new game begins with five players, all of whom have to “confess their sins” of past crimes and lies that have hurt or killed others and Detective Halloran (Callum Keith Rennie) leads the investigation to find who is behind the game and where it’s taking place.  He’s assisted by Detective Hunt (Cle Bennett) and coroners Eleanor Bonneville (Hannah Emily Anderson) and Dr. Logan Nelson (Matt Passmore) and, in typical Saw fashion, suspicions build between them about possibly one of them running the game as the new Jigsaw and it’s full of red herrings until the traditional montage at the end set to “Hello Zep” reveals all the twists.  One of the things fans love about the Saw series it’s wonderfully ludicrous adherence to continuity but Jigsaw lacks any meaningful connections to the original seven and it instead retcons in additions to John’s game history that aren’t cool or interesting and instead takes away some of the impact of, especially, the first Saw.  There’s also no mentions of characters like Hoffman or Dr. Gordon and only a passing reference to Jill and the only slightly interesting tidbit is we possibly learn why John adopted the pig mask in addition to the Billy puppets but that elicits a shrug at best. There’s also some cameos from past iconic traps like the reverse bear trap and the razor blade cube from Saw II in a warehouse “studio” of a Jigsaw fan.

The other huge thing fans love about the Saw series is the creativity of the traps and that is lacking in Jigsaw as well.  The setting of a rural farm for the game is a novel change from the grungy industrial locations of the original series but none of the traps are particularly interesting or complex as the later ones in the franchise (I guess there’s a story reason for this I won’t spoil but…still).  The best one is probably what is basically a giant human blender but the end result of that trap (and some of the other traps) are cut away from in a way that betrays the bloodthirsty fun of the Saw franchise.  To quote the great Hans Moleman, “We paid for blood” and Jigsaw feels almost timid compared to other entries in the franchise.  It’s still violent but it’s not nearly on the level of any of the prior movies which fully embraced their hard R ratings.  The movie also feels too “clean” in the way it’s shot too.  The first seven Saws had a very distinctive “grungy” industrial look to them that matched the locations of the games but in Jigsaw everything feels off.

Besides the great Tobin Bell, the Saw franchise has never really been known for it’s acting but Laura Vandervoort is probably one of the best and most memorable game players and shows maybe the most intelligence and savvy as a player as she quickly figures out the gist of most of the games, with some notable exceptions.  Everyone else is pretty generic and cliche and the reveal of who the secret apprentice is is also extremely lackluster and makes me not excited at all for any potential sequels going forward if that person is going to be the main antagonist.  Going back to Tobin Bell, he’s still great with his iconic voice and calm, methodical way of doing things and there is an explanation for how he shows up here but again, it’s pretty lackluster and uncompelling.

I’m a huge fan of the crazy, convoluted insanity of the first seven Saw movies but Jigsaw is a completely unnecessary soft reboot that does more harm than good to the legacy of John Kramer.  It makes some terrible additions to the franchise’s timeline that undermines the impact of, especially, the first movie and introduces a new antagonist that does not make me excited at all for more movies and overall it lacks the creativity and over the top violence that defined the series.

Jigsaw is Back This Halloween (Trailer)