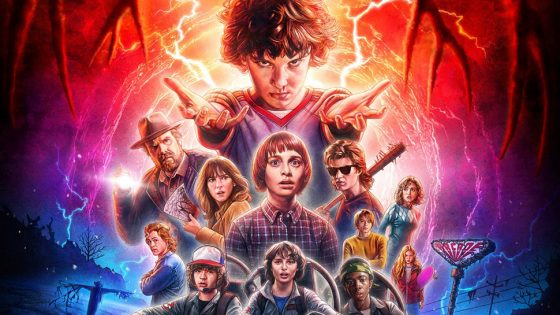 Easily one of the most anticipated pop culture events of the year, Stranger Things returned for it’s second season this past weekend and it was mostly the same 80’s fun as the first season, although slightly less focused and lacking the initial punch of Season 1.  (This is a full season review for Season 2, so possible spoiler warning)

Picking up in 1984 a year after the events of Season 1, things have mostly stayed the same for the majority of the ST crew with the notable exceptions of Hopper (David Harbour) hiding Eleven (Millie Bobby Brown) in his family’s cabin in the woods and Will (Noah Schnapp) having “episodes” of seeing the Upside Down and he has to go see Dr. Owens (Paul Reiser) at the new and improved (and friendlier) Hawkins Department of Energy lab to help determine what is happening to him and why.  Joyce (Winona Ryder) is also dating nerdy RadioShack clerk Bob (Sean Astin).  Other new additions to the cast are Max (Sadie Sink), a “cool girl” from California who gets crushed on by both Dustin (Gaten Matarazzo) and Lucas (Caleb McLaughlin) and her psychotically evil stepbrother Billy (Dacre Montgomery), who is like the dark side version of Steve (Joe Keery) and, as such, develops a rivalry with everyone’s favorite douche turned hero but it’s really not fleshed out in an interesting way or really goes anywhere except a somewhat anticlimactic fight between the two in the back half of the season.  There’s a couple of subplots this season that feel kind of like dead ends or busy work, like the #JusticeforBarb plot of Nancy (Natalia Dyer) and Jonathan (Charlie Heaton) working to expose the truth of Hawkins’ lab to the world with the help of a ridiculous reporter/private investigator played by Brett Gelman that kind of just ends abruptly until a brief callback in the final episode.  All the plots in the first season where all in service of building different parts of a puzzle and it clicked into place perfectly when all three groups (Joyce/Hopper, The D&D party and Nancy/Jonathan/Steve) all came together and it’s much less elegantly done here, although the main plot with Will seeing and eventually becoming infected by a “shadow monster” is great and ups the threat level to Hawkins in a cool way and there’s some fun riffs on The Exorcist/demonic possession as the season goes on.  The one plot that will probably draw the most potential criticism is Eleven’s, as Millie Bobby Brown is separated from most of cast for maybe 80% of the season and tries to uncover her past.  There’s some potentially big world building as another test subject, Eight aka Kali (Linnea Berthelsen) is introduced but Eleven’s quest has nothing to do with anything regarding Will and the dangers growing in Hawkins and it’s not clear if the stuff Eleven uncovers will come back or just be this weird detour and besides Kali, there isn’t a lot new that wasn’t figured out by Hopper/Joyce last season.  I will say that I did appreciate that they didn’t draw out the “Eleven is stuck in the Upside Down” plot, as we got all we needed from that idea from Will being trapped there last season.

As far as the cast goes, everyone is still great and some surprising characters get to shine this year, like Dustin who has two huge plots and an absolutely fantastic new friendship with Steve as the pair team up to stop a new rogue Demogorgon that Dustin inadvertently nurtures to deadly size.  The Hopper/Eleven stuff in the beginning of the season is great as well and lets both David Harbour and Millie Bobby Brown dig their teeth into some emotional father/daughter stuff.  Mike however is kind of put on the backburner (I don’t know if maybe Finn Wolfhard was busy filming IT or what) and really doesn’t have anything to do besides tag along with Joyce, Hopper and Will and separating him from Eleven for the entire season pulls a lot of the heart out that drove the first season and the love triangle plot of Max/Lucas/Dustin doesn’t have nearly the same oompf.  Speaking of love, after going for it and having Steve and Nancy be the couple at the end of season 1, they break up in a really half assed plot turn that really makes you question why the hell they didn’t just go with Nancy/Jonathan to begin with.  With the new cast members, Paul Reiser and Sean Astin are both excellent additions to the show and fit right into the established cast and both characters build to interesting and somewhat unexpected climaxes but Max and especially Billy don’t really justify their existence or plot focus (Max is a decent new member of the D&D team but doesn’t bring any vital new skills or insight).  There’s also still the great comedic relief side residents of Hawkins like the still oblivious Wheelers, nerdy Mr. Clark and Hopper’s somewhat incompetent deputies that helps make the world feel bigger and more lived in. The show also seems to have slightly toned down the “It’s the 80’s!”ness of season 1 with the references, as they feel slightly more organic or in the background but musically they definitely want you to know what decade you are in, as there’s at least one licensed song every episode and the first episode back feels almost wall to wall 80’s songs.  One cool new 80’s location though is the arcade that the D&D crew hang out at, trying to beat Dragon’s Lair and you get to see a ton of old school arcade games (the guys also become interested in Max because she beats their score in Dig Dug).

Stranger Things 2 is still mostly the same creepy 80’s fun of the first season but it’s ambitions to be bigger and better result in a less focused and messier second season and there’s some character decisions, like isolating Elle, that don’t seem to make much sense, although that’s balanced out by some truly great team-ups like Steve/Dustin.  The show is not bad by any stretch of the imagination but season 2 falls into some of the traps that plague most sequels where they can’t match the initial freshness and impact of their predecessor but if you were a fan of the first season, season 2 still has most everything that made it great and is still 100% worth binging on Netflix.