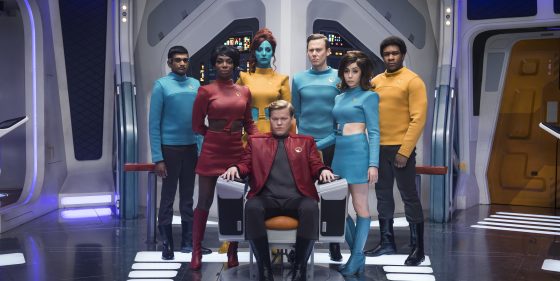 Black Mirror is returning next year to Netflix with 6 new episodes and they’ve been slowly doling out teasers for each individual episode, culminating today with the teaser for their Star Trek “spoof”(?), U.S.S. Callister starring Jesse Plemmons and Cristin Milioti.  The other episodes include the post-apocalypic looking Metalhead from Hannibal/American Gods director David Slade, Hang the DJ, about a portable device that guides you through dating, Black Museum, an anthology in the vein of Black Mirror’s “White Christmas” episode, Crocodile from John Hillcoat, about an investigator looking into a crash with a device that lets her see people’s memories and Arkangel from Jodie Foster, about a technology for parents to control their children.  All of these episodes are most likely going to go to some horrifying, depressing twist ending (last season’s San Junipero as the lone exception) but also will probably be some of the best sci-fi you’ll see next year.  There’s no solid release date yet but you can check out each episode’s teaser below.