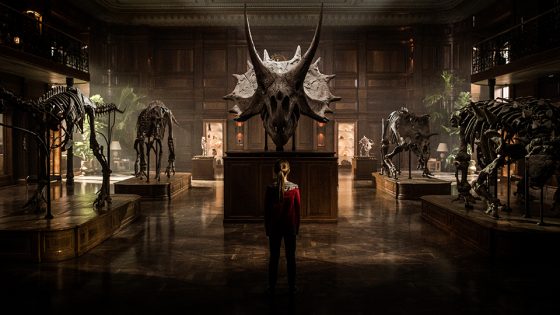 After dominating 2015 with Jurassic World, the dinosaur action returns next year for the sequel to that soft reboot of the Jurassic Park franchise, Jurassic World: Fallen Kingdom.  Four years after Jurassic World had it’s massive disaster with the Indominus Rex and shut down, the remaining dinosaurs are in danger of being wiped out as Isla Nublar’s volcano is erupting.  Claire (Bryce Dallas Howard) and Owen (Chris Pratt), although no longer together romantically, lead a team back to the island to rescue and transport the dinosaurs to a safer location, but some of them don’t seem to understand that the humans are here to help.  Owen also wants to find Blue, the raptor he raised from birth and who rescued him along with the OG T-Rex at the end of Jurassic World.  Jeff Goldblum is back as Ian Malcolm and BD Wong, who took a heel turn in Jurassic World, is also set to return and Toby Jones, Ted Levine, James Cromwell, Rafe Spall, Justice Smith and Daniella Pineda co-star.  JA Bayona, who directed The Orphanage and last year’s When A Monster Calls, is directing with Spielberg and World director Colin Trevorrow producing.  It’s out on June 22nd next summer and you can check out the first trailer below.

The Indoraptor is Revealed in the Final Jurassic World: Fallen Kingdom Trailer