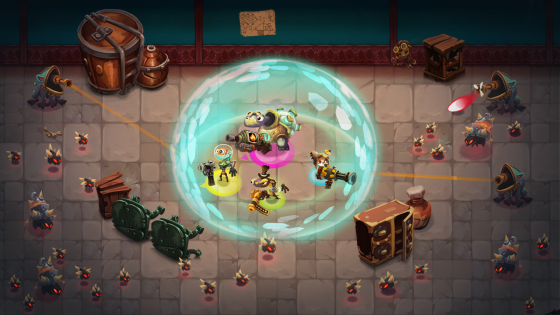 The final Gamebox 2.0 of 2017 is here with a couple of cool games to checkout over your holiday break and a shooter from back in 2011.

Genetic Disaster: Coming from Team8 Studio, Genetic Disaster is a twin stick shooter with a really fun art style that you don’t normally see in the genre.  Four science experiments are trying to escape from the mansion of the mad scientist who created them and to do that, they’ll have to shoot their way through 10 procedural generated levels.  Each of the characters has a specific skill and it features up to four player local co-op along with online co-op.  One nitpick is that a lot of the weapons have limited ammo that needs you to constantly reload.  This adds a challenge where you have to dodge enemies while reloading but my personal preference is more along the lines of Smash TV or Nex Machina, where your base weapon is a machine gun.  The game plays great and like I mentioned above, the art style is really cool and it’s a nice change of pace from the sci-fi settings that a lot of twin stick shooters are set in.  It came out on December 15th on Steam, so check it out now.

Tiny Metal: Coming out of Sony Music Entertainment Japan’s new video game division, Unties, Tiny Metal is a throwback to Advance Wars and Japanese arcade strategy games from Area 35.  The game is a turn based strategy game with a very similar, anime style art style to the Advanced Wars game where you control the military of one country battling their bitter rivals for control of territory and resources, with the main units in the military being “Metals” like tanks and jeeps.  During your turn, you move your units and then can attack if near an enemy, which goes to a cutscene showing the two units fighting each other and getting damage.  Each unit has a certain amount of individual units and when all of them are destroyed, that unit is gone.  You can also capture buildings like factories to build more units and you can enter forests and mountains to get a tactical advantage and there’s also a strategy called focus fire where you can link up multiple units around an enemy and they’ll all attack at the same time for massive damage.  The presentation is great and the strategy is very accessible but deep enough for fans of the genre.  The game also has multiplayer if you want to test yourself against a human opponent.  Despite coming from a Sony division, the game is actually available on Switch and PC as well as PS4 and it’s out today (12/21) if you want to check it out.

Post Human W.A.R.: Speaking of turn based strategy, Post Human W.A.R. is another fun new entry in the genre with a fantastic sense of humor and art style.  Set on a post-apocalyptic Earth, humanity is gone and three factions are left to battle for supremacy.  Humanity’s servant robots are dedicated to preserving the remaining culture of their masters, mutated animals want to destroy any remnants of humanity in revenge and intelligent apes want to build their own society.  Each faction has unique units but they fall into similar roles of short range and long range attackers plus support units and giant vehicles and weapons.  A unique part of the gameplay is that at the beginning of a match or mission, you are choosing which units to bring in based on how much money you have and how much each unit costs but you are selecting one unit to be your “champion”.  Your opponent selects a “champion” as well and neither side knows which unit is the champion but, if that unit is killed, it’s an instant loss for the player who selected them.  There’s also an option to reveal who your champion is and give them a big power boost but then your opponent will probably be gunning for them, so there’s a lot of strategy just involving your champion besides the normal strategy of picking the right units and getting them into position to attack.  The animation and voice over for Post Human W.A.R. is fantastic and it’s fun to just see all the weird and varied units on each team, like a flying battle refrigerator or a giant monkey cannon.  It came out last week on Steam if you want to check it out.

Homefront: 2011’s Homefront was available for free recently from Humble Bundle, so I got the chance to finally see what this Red Dawnesque game was all about.  Set in an alternate future where Korea unifies and takes over the world, you play as fighter pilot Jacobs in occupied America, specifically Colorado to San Fransisco.  It’s very much in the Call of Duty model, sometimes blatantly ripping off sequences like a thermal vision shooting segment when you control a UAV or slow mo breaching, but it’s overall solid shooting and I felt the areas had a lot of great avenues of cover so you could actually get up and flank enemies.  It’s also kind of fun to be getting into brutal shootouts in a Hooters or Costco, since the whole game takes place mostly in suburbs.  The campaign is insanely short, about 4 hours, but for free, it was a solid afternoon of shooting action.  That deal is unfortunately over now but definitely keep your eye on the Humble Store because they’ve been giving away some games for free that I’ve been interested in but probably never would have bought new.