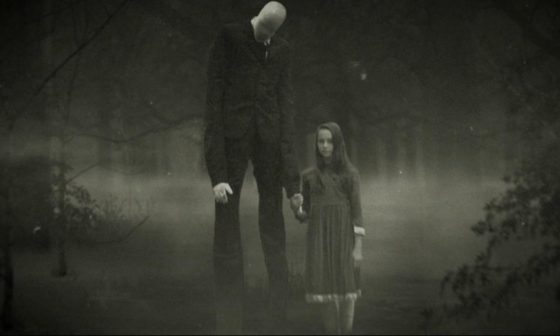 Since his creation by Eric Knudsen on the Something Awful forums way back in 2009, Slender Man has spread to all corners of the internet and other media like video games but he’s making his big screen debut this summer in the movie of the same name.  You only get a brief glimpse of the tall demonic figure in this trailer but it appears his evil influence is affecting a group of teens played by Joey King, Jaz Sinclair, Julia Goldani Telles, Annalise Basso and Alex Fitzalan, causing them to see horrific imagery and attempt to cause harm to themselves and others.  It looks suitably creepy and disturbing, although also kind of generic?  It’s directed by Sylvain White, who directed the adaptation of The Losers along with episodes of The Americans, Lethal Weapon, Person of Interest and pretty much every other action/drama of the last few years.  The movie is out on May 18th and you can check out the first trailer below.