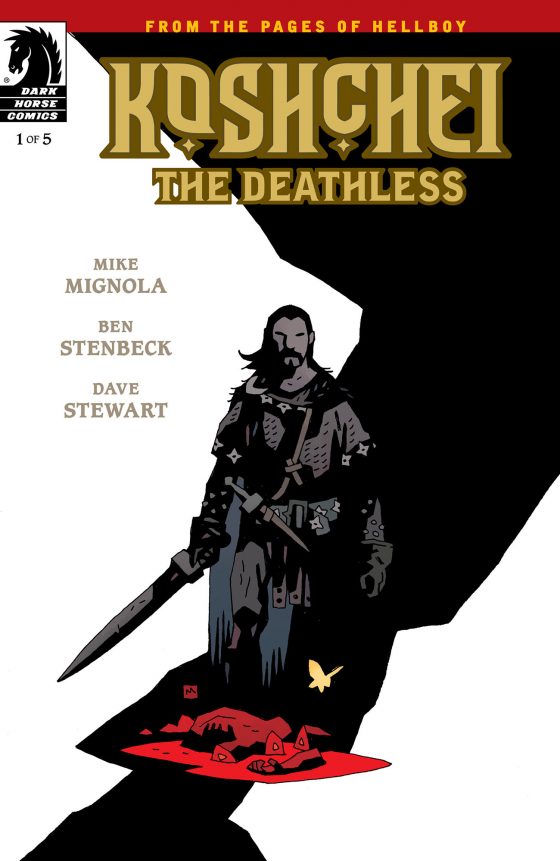 After countless battles, dealing with all sorts of magical creatures and figuring out what to do in Hell, can’t two guys enjoy a beer in a pub? Hellboy and Koshchei the Deathless find themselves in a pub in Hell that gives the two warriors a little time off. While they sit and drink the two talk about their encounters and Koshchei tells his story about how he transformed from being an ordinary human to becoming a walking death dishing vessel. Koshchei started as a foot solider in the medieval times, fighting for a kingdom that soon betrayed him and left him for dead in a forest. A dragon saves his life and grants Koshchei a magical shirt after several years of loyal servitude. From his magical shirt, Koshchei is victorious in many battles and is happily wed to a princess, but this happiness does not last and is once again betrayed and killed. The same dragon brings Koshchei back to life, but separates his soul from his body, making him invincible from death. Koshchei’s soul was hidden inside an egg, that is inside a rabbit, that is inside a goat, that is hidden inside a tree in some mysterious location. Koshchei lead a campaign for his revenge of his death, building an army of his own and trying to find some meaning to his life after his soul is gone. After finding a servant of Baba Yaga, a mystical witch, Koshchei is tasked with hunting down dragon eggs in order to exchange for Baba Yaga promise to reveal the location of Koshchei soul.

Koshchei was first introduced in the Hellboy: Darkness Calls story arc. In later stories, Koshchei mind was taken over by Baba Yaga and fought Hellboy on many occasions. Koshchei The Deathless takes place sometime after Hellboy has yet again saved the world and is now journeying in Hell itself. Koshchei  reminiscences about his past to Hellboy in a series of flashbacks to major moments of his life. The Hellboy series is known for taking regular people into super natural situations, and Koshchei follows the same pattern. Koshchei wanted the simple warrior life, fight for a kingdom and be the most badass person with a sword. It was only by a chance encountered that saved his life and lead him into a world beyond regular human understanding.

Koshchei existance after becoming a souless warrior was to find and protect his soul that ended up as a twisted ‘turducken’. This is actually based on a real slavic lore about Koshchei, which was a character featured in many European fairy tales. Typically Koshchei was depicted as a greedy king that had his soul encased in numerous animals and objects to keep his immorality and continue to terrorize his kingdom. Mike Mignola of spicing up the folk lore of Koshchei by making him a brutal warrior that fights to seek his revenge and eventually tries to redeem himself.

Long time Hellboy fans will recognize returning characters from previous story arcs and will see how Koshchei came to serve Baba Yaga, a decision that will lead Koshchei into a journey that spans centuries. New readers to the series might need a quick reference guide to get on track if they never heard of Hellboy before, tho that’s all their fault for not knowing who the big red guy with the giant hand is.

Koshchei The Deathless #1 is on sale January 3rd.