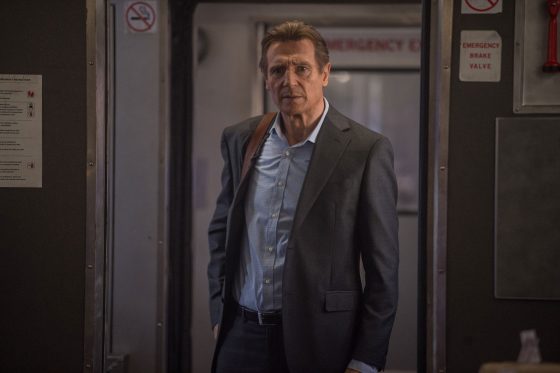 It’s been a year or two since Liam Neeson has Bronson punched someone but he’s back in action mode along with his four time director Jaume Collet-Sera for The Commuter.

Neeson plays Michael MacCauley, an insurance salesman who takes the same train back and forth between NYC and his home in Tarrytown every day.  After he’s fired from his company and left with only insurance as severance, which doesn’t help with his mortgage or his son’s college tuition, Michael is given an odd opportunity by a mysterious woman named Joanna (Vera Farmiga) on the train ride home where he can claim $100,000 if he successfully locates a specific passenger on the train and tags them with a GPS tracker. Taking the initial $25,000 hidden in the train’s bathroom, Michael quickly realizes things are much more dangerous than they first appeared and the person he’s looking for and his family are both in danger.  If you saw Non-Stop, The Commuter is very similar in terms of plotting and structure.  Both movies, while played up in the trailers as crazy action movies, are actually more mystery thrillers.  There’s much more of Neeson questioning people and trying to unravel what’s going on than fisticuffs and explosions.  That’s not to say that’s bad; The Commuter is a solid thriller that feels like a good summer or airplane book and there’s lots of great red herrings and twists as the situation gets more and more out of hand.  The movie does seem to go on possibly a bit too long; there’s a big set piece that feels like the finale but then the movie goes on for another 15-20 minutes.  It’s similar to how Speed wrapped up the main plot on the bus but then went into the subway bit for the actual climax.  Overall though, if you enjoyed the mystery and twists of Non-Stop, you’ll definitely enjoy The Commuter as well.

Neeson is great as always in his gruff action hero persona although Michael is slightly more frazzled than say, Bryan Mills, and they play up his age more than his other recent action movies.  The couple fights he gets into are against much younger opponents and you can tell he’s trying to hold his own but he’s taking a beating and he keeps yelling that he’s “60 years old!”.  The one aspect of his character that was bizarrely hidden in the advertising is that he’s actually an ex-cop, which explains both his ability to fight and investigate.  It’s dropped so casually in the movie that it’s weird that the trailers wouldn’t mention it.  Patrick Wilson is actually his former partner and is part of a great supporting cast around Neeson that includes the aforementioned Vera Farmiga (Conjuring Reunion!), Jonathan Banks, Sam Neill and Elizabeth McGovern.  The rest of the cast is less well known but they fall into their stereotypical and/or red herring roles in a solid, fun way.  The directing by Jaume Collet-Sera is solid as ever as well. He’s not going to be called a visionary or anything but I appreciate that he always throws in some sort of visual flair into every movie, whether it’s the on screen cell phone screens of Non-Stop and The Shallows or the GPS map transitions of Run All Night.  Here he delivers a stylish opening sequence that intercuts multiple morning routines for Neeson to establish his familiarity with the train and it’s passengers and some other flourishes as the movie goes on, like a ramp zoom in when Neeson realizes exactly what he’s gotten into.

The Commuter is a fun mystery thriller that continues the solid partnership of Neeson and Collet-Sera.  If you enjoyed their previous films, especially Non-Stop, then you’ll definitely want to check out The Commuter as well.

Liam Neeson Boards the Wrong Train in The Commuter (Trailer)