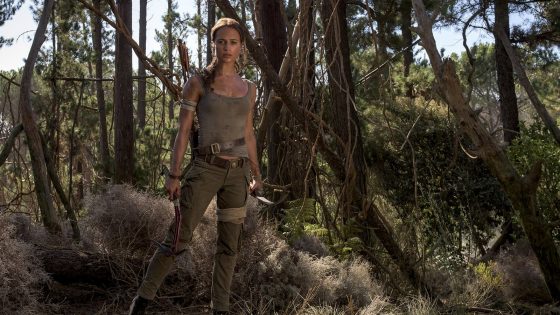 Looking to hopefully break the curse of all video game movies being terrible (although some like Mortal Kombat and Street Fighter are awesomely so), Tomb Raider has an Oscar winner and the always incredible Walton Goggins.  Alicia Vikander brings the Lara of the new, excellent, Square Enix games to life as she tries to uncover what happened to her father (Dominic West) and stop the evil organization Trinity from discovering an ancient power on a mysterious island that would let them destroy the world.  Goggins is the leader of Trinity expedition and has history with Lara’s father and Into the Badland’s Daniel Wu is Lara’s sidekick Lu Ren.  Visually and action wise, the movie looks incredibly faithful to the 2013, including some brutal falls and injuries to Lara as she falls down rivers and gets pulled through the woods by a parachute and she has her trusty climbing axe and bow as well.  We saw with Assassin’s Creed how even a movie stacked with ludicriously good actors can still be a train wreck but hopefully this one is good.  It’s out on March 16th and you can check out the new trailer below.