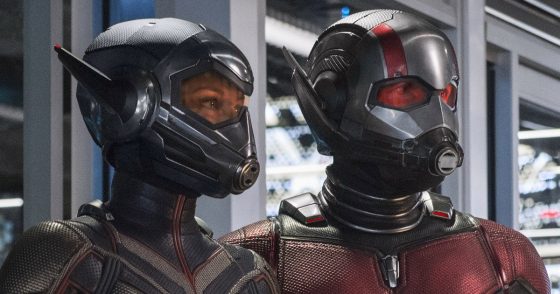 While the entire MCU battles Thanos in Infinity War, Scott Lang will be dealing with the repercussions of the Civil War in his next featured movie, Ant-Man and The Wasp.  Although it seems like Cap was rescuing his team from The Raft at the end of Civil War, Scott has seemingly been recaptured and placed on house arrest by the FBI while Hope Van Dyne (Evangeline Lily) and Hank Pym (Michael Douglas) were forced to go on the run.  Hope finally becomes The Wasp thanks to a new suit designed by her father Hank and she and Scott must face the new threat of The Ghost (Hannah John-Kamen), who in the comics is an anti-captialist sabotoeur with the ability to go intangible and is an expert in hacking and technology and is normally a Spider-Man/Iron Man villain.  Laurence Fishburne, Michelle Pfeiffer and Walton Goggins(!) are joining the cast as well and Judy Greer and Michael Pena are back as well.  Peyton Reed is also returning to direct and it looks like it has the same fun energy of the first movie, especially now with the addition of The Wasp and Scott unlocking his Giant Man abilities.  The movie is out on July 6th and you can check out the first trailer below.