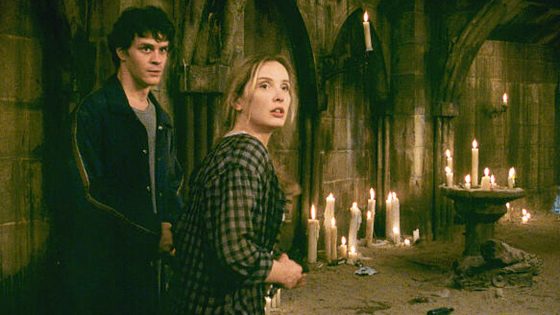 An American Werewolf in London is one of the all time classic horror movies but it’s loose sequel, An American Werewolf in Paris…is not.  Coming out in 1997, the movie starred Tom Everett Scott and Julie Delpy and followed Andy (Scott), an American tourist who is in Paris with his buddies but accidentally uncovers the city’s underground population of werewolves and is transformed into one himself.  The movie bombed at the box office and was roasted by critics, mostly for it’s terrible looking CG that pales in comparison to the incredible Rick Baker practical effects of the 1981 predecessor.  The one thing that was successful out of An American Werewolf in Paris though was the Bush song from it’s soundtrack, “Mouth”, which peaked at #5 on the Billboard Alternative chart.  The song was heavily used in the trailers for the movie and Julie Delpy appears in the band’s video, where they are travelling and then arrive to perform at some sort of carnival.  The strange thing about “Mouth” is that the version that was used in the film and on the radio is actually remix by Stingray, which was actually a pseudonym for Bush, and the original version is off of the band’s second album, Razorblade Suitcase.  Check out the video below.