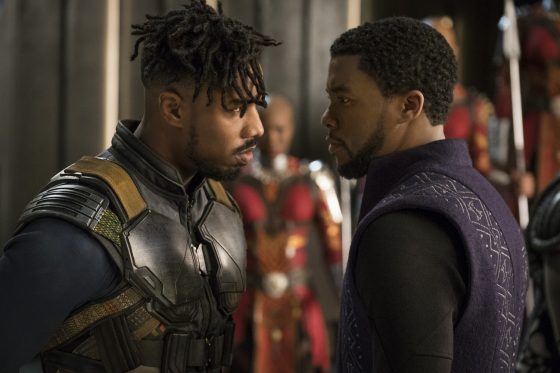 The first huge blockbuster of 2018 has arrived with the first of 3 MCU movies, Black Panther.  While I personally believe the hype has reached hyperbolic levels, Black Panther is still a solid and fun entry in the MCU.

Picking up a week after Civil War, T’Challa (Chadwick Boseman) returns home to Wakanda to officially claim the throne and be crowned king following the death of his father.  Almost immediately after claiming his title however, T’Challa gets word about Ulysses Klaue (Andy Serkis) trying to sell Wakandan artifacts in South Korea and goes to arrest, and kill if necessary, Klaue for his past crimes against Wakanda. Unknown to T’Challa, Klaue is working with a black ops operative named Eric “Killmonger” Stevens (Michael B. Jordan), who has personal history with Wakanda.  The plot has some solid twists and is efficiently paced and does a great job of not holding the audience’s hand overly explaining Wakanda and it’s people and traditions.  Since this is the first time exploring this new corner of the MCU, it could have easily had some sort of outside character that gets everything explained to them (perhaps Martin Freeman’s Agent Ross if he had arrived in Wakanda earlier than he does) but it trusts the audience to pick up on the relationships and what’s happening, which is something I always greatly appreciate.

The two aspects where Black Panther truly shines is it’s setting/design and it’s cast.  Much like Sakaar last year in Thor: Ragnorak, Wakanda is an amazing visual feast that is bursting with colors and fantastic sci-fi elements, like mag lev trains and traditional African weapons and clothing hiding high tech hidden features.  The side trip to South Korea is also fantastic and gives an awesome James Bond feel that nothing else in the MCU has really done.  The characters in Black Panther are also one of it’s strongest features.  Chadwick Boseman was great in Civil War and he’s even better here, perfectly capturing the regal bad assery of T’Challa while also getting to show of his charming fun side and his dramatic side as well.  The person who almost steals the entire movie is Letitia Wright as Shuri, who is both T’Challa’s little sister and his spunky Q, developing all of his gadgets and helping out with things like the extremely cool remote driving tech Wakanda has developed where someone can safely pilot cars and planes while seated in a simulated cockpit.  The Walking Dead’s Danai Gurira is also fantastic as Okoye, leader of Wakanda’s bad ass Dora Milaje warriors, who despite the seriousness of her position allows lots of fun little asides and one liners to get out.  Andy Serkis is an absolute blast as Klaue, who we haven’t seen since Age of Ultron.  He seems to be having a ton of fun playing Klaue like some sort of over enthusiastic soccer hooligan who also happens to have an extremely dangerous blaster for an arm.  Michael B. Jordan does a great job of delivering a threat that can stand up to T’Challa and his motive is one of the better reasons for villainy in the MCU, reminiscent of the kind of sympathetic reasoning behind Adrian Toomes in Spider-Man: Homecoming.  The rest of the cast is also stacked to the gills with people like Angela Bassett, Forest Whitaker, Daniel Kaluuya, Lupita Nyong’o, Sterling K. Brown and Winston Duke.

The main negative that drags down Black Panther slightly is that the action is not particularly great, especially the opening and closing fights.  The opening fight is a dark, murky mess that fails to get the movie off to the rousing start it should have and the final battle between T’Challa and Killmonger is also dark and weirdly paced and succumbs to the same thing that the Iron Man and other MCU movies have resorted to for their climaxes where you basically have identical, CG characters fighting each other, as (and this was in the trailers), Killmonger also gets a Black Panther armor.  There’s a massive ground battle taking place above ground while Killmonger and T’challa fight underground and everything going on up there is much more exciting and interesting that the fight between our hero and main villain (it probably also helps that that big battle is happening in the daylight so you can see what’s actually happening).  The aforementioned South Korea sequence is great though and starts out like a Bond movie before turning into full on crazy superhero action and both times T’Challa has to engage in ritual combat to protect his title, those fights are extremely well done as well.

There’s a lot of “greatest movie of all time” “Best MCU movie ever” talk getting thrown around for Black Panther and, for me, that is definitely not the case.  It doesn’t reach the heights of the first Avengers, Winter Soldier or Civil War and wasn’t the absolute blast that Thor: Ragnorak was last year but that doesn’t mean it’s terrible by any means.  I would definitely put Black Panther in the upper middle of any MCU ranking and definitely can’t wait to see these characters this summer in Infinity War and beyond since, based on the box office, we’re definitely getting at least one Black Panther sequel.

Action Hero of the Week: T’Challa

Hail to the King with the New Black Panther Trailer