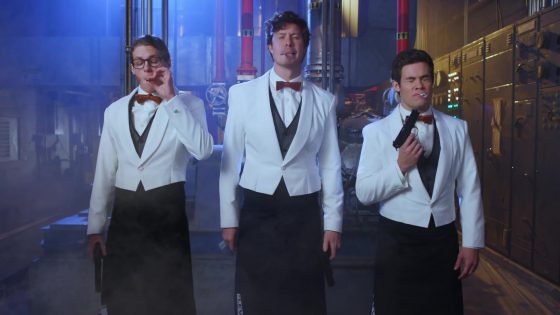 It’s been just about a year since the final episode of Workaholics aired but Blake, Anders and Adam are back in the upcoming Netflix movie, Game Over, Man!.  The guys are working as waiters/maintenance guys in a glitzy hotel that gets taken over by terrorists led by Neal McDonough and they manage to escape and attempt to become John McClanes to save the hostages and look cool while doing it.  There’s a murderer’s row of supporting cast on board including Sugar Lyn Beard, Cloris Leachman, Jere Burns, Sam Richardson and Shaggy and Kyle Newacheck is behind the camera, as it should be.  It looks like the same dumb hang out vibes as Workaholics but with a bigger budget and more action, which I’m 100% on board for.  It’s out on March 23rd on Netflix and you can check out the trailer below.

Jared Leto Joins the Yakuza in The Outsider (Trailer)

Jessica Jones Gets Back to Work in March on Netflix (Trailer)