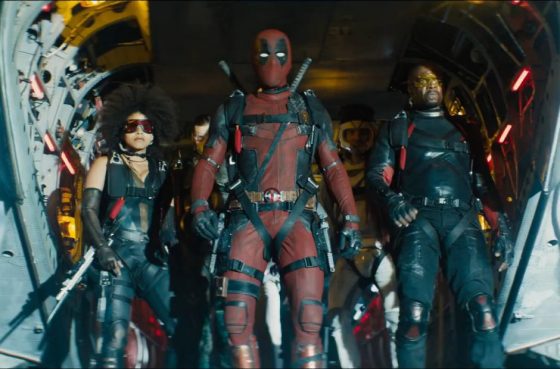 After brilliant parodies and wacky in-jokes, the first good, long look at Deadpool 2 is here and it looks groin grabbingly awesome.  Although the “official” synopsis is still this hilarious joke,

After surviving a near fatal bovine attack, a disfigured cafeteria chef (Wade Wilson) struggles to fulfill his dream of becoming Mayberry’s hottest bartender while also learning to cope with his lost sense of taste. Searching to regain his spice for life, as well as a flux capacitor, Wade must battle ninjas, the yakuza, and a pack of sexually aggressive canines, as he journeys around the world to discover the importance of family, friendship, and flavor – finding a new taste for adventure and earning the coveted coffee mug title of World’s Best Lover.

the real plot seems to involve a young mutant, played by Hunter for the Wilder People’s Julian Dennison, becoming the target of Cable (Josh Brolin), who travels back to the past to kill him and Wade (Ryan Reynolds) assembles his own, franchise friendly, team to stop him.  Terry Crews, Bill Skarsgard, Zazie Beetz’s Domino and Shioli Kutsuna are Wade’s new allies and TJ Miller, Morena Baccarin, Leslie Uggams, Karan Soni, Brianna Hildebrand and Stefan Kapicic are all back as well, with John Wick’s David Leitch directing.  It’s out May 18th and you can check out the slightly NSFW trailer below.