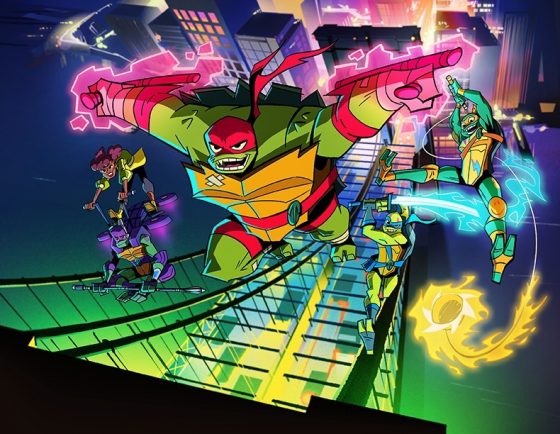 Nickelodeon is rebooting the TMNT yet again after the most recent CG series ended with Rise of the Teenage Mutant Ninja Turtles.  Returning to traditional animation, this new series goes back to the early days of the Turtles as they are just learning how to be heroes, teaming with their human friend April O’Neil (Kat Graham) to take on new villains like the John Cena voiced Baron Draxum.  In a change from almost every prior incarnation, Raphael (Omar Miller) is now the leader of the team (finally redeeming Partner in Kryme’s lyrical error in Turtle Power) and the Turtles are also apparently able to tap into latent mystical ninja powers as well.  Leonardo is voiced by Ben Schwartz, Donatello is voiced by Josh Brener and Michelangelo is voiced by Brandon Mychal Smith with Eric Bauza as Master Splinter and OG TMNT voice actor Rob Paulsen has returned to the fold as the show’s voice director and will provide some voices as well.  The show will be 26 episodes and arrive this September, check out the trailer below.

The Ninja Turtles Are Back and “Out of the Shadows” (Trailer)