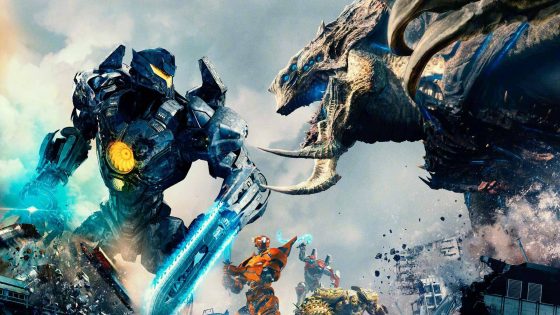 Guillermo Del Toro fulfilled one of his lifelong dreams and delivered an epic smackdown between giant robots and giant monsters with 2013’s Pacific Rim and now the sequel has arrived with Pacific Rim Uprising which, while still fun, is definitely lacking the unique brand of GDT weirdness that fueled the original.

10 years after Pacific Rim, Uprising follows Jake Pentecost (John Boyega), the son of legendary hero Stacker Pentecost (Idris Elba), who is making a living scavenging and selling items on the black market of California.  When he’s beaten to a piece of valuable Jaeger tech, he tracks down his fellow thief and finds young mechanical genius Amara Namani (Cailee Spaeny), who has built a small solo Jaeger of her own. Both of them are arrested following a chase and both are sent the Shatterdome instead of prison by Pan Pacific Defense Corps Secretary General Mako Mori (Rinko Kikuchi), with Jake helping his old co-pilot Nate Lambert (Scott Eastwood) train a group of Jaeger pilot cadets.  Meanwhile, a Hong Kong tech company, Shao Industries, is campaigning the PPDC to deploy their new remote controlled drones, a program headed up by former PPDC scientist Newt Geiszler (Charlie Day). There are some fun, weird twists that I won’t spoil but there are also lots of big beats and plot developments that you will see coming from a mile away. It’s not as big a concern as it might be in other movies since John Boyega carries the entire movie with effortless charm and seems to be having a great time. Cailee Spaeny is also great and spunky as Amara and she and Jake are paired up basically from the start.  Scott Eastwood is still an incredibly bland presence like every movie he’s been in but he’s at least slightly better and has more to do here than in The Fate of the Furious. The returning cast members all pretty much fall back into their characterizations from the first movie, although Newt seems to have inherited the fashion sense of Ron Perlman’s Hannibal Chau, who is only briefly mentioned in passing in Uprising. Rinko Kikuchi and John Boyega don’t have a ton of scenes together but they have a very solid sibling rapport (even though we never knew Jake even existed before this movie) and Mako has transitioned well to a leadership role.

One of the strange things about Pacific Rim Uprising is that it takes almost the entire movie for actual Jaeger vs Kaiju action, with almost all of it being reserved for the crazy but fun climax.  Before that, there’s only simulations or flashbacks of Kaijus and the real battle is between Gypsy Avenger (piloted by Jake and Nate) and a rogue Jaeger dubbed Obsidian Fury, who attacks the PPDC base in Sydney and most of the first half of the movie is the PPDC trying to figure out who was piloting it, who sent it and what their goal is.  The action overall is cool and well done with the new class of Jaegers being more nimble and maneuverable than the originals, like one called Sabre Athena that can basically do martial arts and wields dual katanas. The action is missing GDT’s sense of weight and scale though. In the first Pacific Rim, you felt every impact and there was huge amount of weight behind each punch from a Jaeger or claw strike from a Kaiju and things don’t have as much impact in Uprising and it’s also shot in a more generic blockbuster way that lacks the sense of epic scale that was all over the first movie.  There’s also almost none of the weird world building or personal touches that were all over Pacific Rim. Stuff like the Drift, the Jaeger names, the look of the Kaiju all carry over from the first movie but it’s like putting a cherry on top of a sundae that you didn’t make. There’s still some weirdness but Uprising definitely feels more like it was constructed from focus groups and not the fever dreams of a lifelong Godzilla fan.

If you enjoyed the first Pacific Rim, especially the Kaiju vs Jaeger action, than you’ll most likely enjoy Pacific Rim Uprising as well.  It’s fun, breezes past and has an incredibly charming John Boyega carrying things through but it also feels more impersonal and generic than its predecessor.

Re-enter The Drift in March for Pacific Rim: Uprising (Trailer)

The Apocalyse Was Only Delayed in Pacific Rim: Uprising (Trailer)