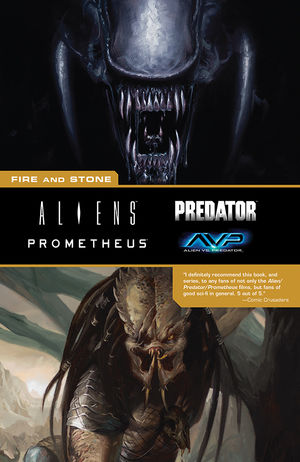 Welcome to planet LV-223, known for the doomed USCSS Prometheus expedition and marked as an abandon moon in the star system. 100 years after the events of Prometheus has brought new life on the planet, drawing a generation of new explorers to pick up from where the crew of Prometheus had left off. These explorers, a Weyland-Yutani Corporation  research and recovery crew travelling on the ship Geryon, had come to LV-223 in hopes of finding clues about the Prometheus crew. However, over a century of evolving has changed the planet, turning it from a once desolate landscape into an exuberant habitat. As the crew members of Geryon discover more about the life on the planet, they quickly find out that some discoveries are best left alone. Xenomorphs, Engineers, and the Predators face off in battle for survival.

This trade paper back contains the complete Fire And Stone saga that crossed different comic series in one interlocking story. Prometheus, Aliens, Aliens verses Predator, Predator and Prometheus-Omega each ran a few issues with the Fire And Stone story line from 2014-2015, breaking up the overall story into different chapters of the saga. 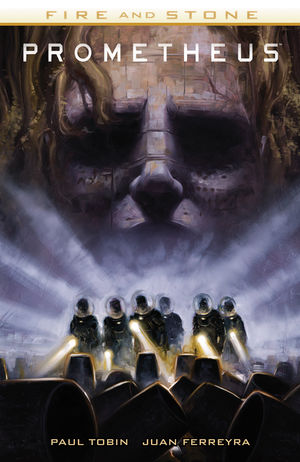 Fire And Stone: Prometheus, by Paul Tobin and Juan Ferreyra. This series beginning point and introduces the crew of the Geryon and reintroducing LV-223 as a colorful and still deadly planet. Captain Angela Foster and her crew study the strange new life and hunt for material left behind by the Prometheus. Astrobiologist Francis Lane uncovers the black goo, the mysterious mutagen that transform life, and takes a few samples to study. When a nest of Xenomorphs is discovered, Francis Lane uses his android assistant Elden to test a theory about the healing powers of the black goo, but it goes terrible wrong and Elden begins to transform into something much more horrifying. 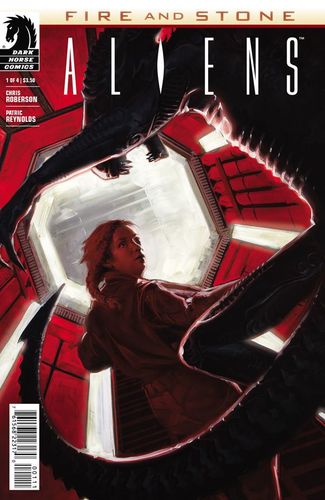 Fire and Stone: Aliens, by Chris Roberson, Patrick Reynolds and Dave Stewart. Taking places years before the events of Fire And Stone: Prometheus and occurs before the movie Aliens on LV-426. This part tells the story of the destruction of the terraforming settlement Hadley’s Hope and the survivors that would escape to LV-223. Scientist Derrick Russell’s obverses the growing life on LV-223 and begins to research the black goo left behind by the Engineers. 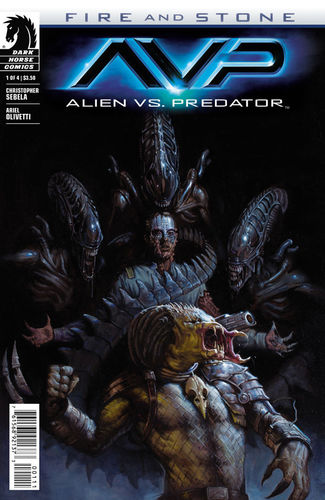 Fire and Stone: Alien verse Predator, by Christopher Sebela and Ariel Olivetti. The events of Fire And Stone: Prometheus draws the attention of a predator clan. The predators find the challenge of the Xenomorphs and the Engineer to be a worthy hunt and seek to calm their trophies. A newly mutated Elden is on a mission to hunt down Francis Lane and find the answers in the humans that forced his creation. 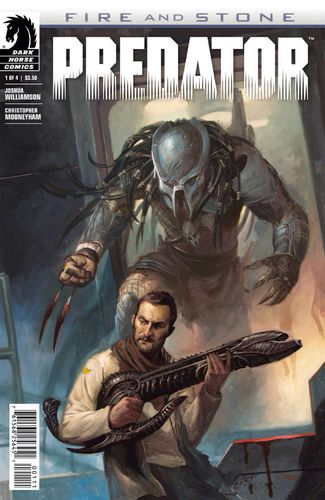 Fire and Stone: Predator, by Joshua Williamson and Christopher Mooneyham, John Lucas, and Dan Brown.  A lone Predator seeks the head of the Engineer on LV-223. Along for the hunt is a survivor of the Geryon crew that Predator has forcefully recruited to help. The two fight their way through the jungle landscape and make their way to a face off with the Engineer to an epic match of deadliest creature on LV-223.

Fire And Stone: Prometheus-Omega, by Elly Sue DeConnick and Agustin Alessio. Following the events of Fire and Stone: Predator, the surviving parties band together for a gathering mission to find a way off LV-223. The planet still has many mysterious to be discovered, and many unanswered questions, and the survivors must utilize all resources they could find and live to see another day.

Any fan of the Alien, Predator and Prometheus series will find something to enjoy in main plot of Fire And Stone. The collaborative works of the different creators tell a great sci-fi adventure that hits all the highlights of each series; there are space mercenaries, egomaniac scientists, derange androids, predator honor and philosophical questions about life. The illustrations from the various creators put a unique touch to each iteration of the main plot. Some chapters are displayed in mature cartoon-ish fashion and others have a hyper realistic tone that makes every action scene feel real. The diverse artist choices keeps the visuals feel fresh and mixes the humorist writing with mature imaginary.

If you are a sci-fi fan and happen to love one of the best alien series created, then getting your hands on this massive collection of comics is a must.The rich history of the Alien franchise is finally connected by the a comic series that bridges a gaps in plot between the movies. There are 418 pages of all great alien surviving tales, plus none of it includes androids playing flutes (Take that Alien: Covenant). So if you are looking for the more sci-fi adventure, pick up this collection and get to exploring the unknown without stepping foot on LV-223 today.