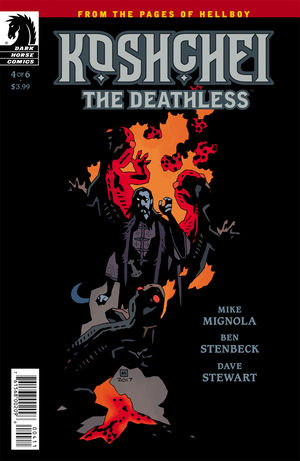 Koshchei meets a mysterious strange woman that instantly connects the two. Lost in a wandering haze of either love or a powerful spell, Koshchei follows the woman around the land. Koshchei witnesses all sorts of creatures pay respects to the woman. A witches’ sabbath brings droves of to worship the woman. The dead rise from their graves to knee at her feet. But Koshchei attempt to find happiness once again only brings more confusing and painful moments. His journey will bring him to an hidden enemy that will dash his hopes for a better future.

Issue four gives Koshchei back his drive to explore the world, either by accompanying in a love sick trance or searching for answers. His time being isolated from the world gave him much needed time to reflect, and realized that he not have love in his life. Though his soul is apart from his body, his heart is still intact and very vulnerable to be influenced over. Mike Mignola crafted a popular weak spot for Koshchei that a cold heart fiend could abuse and a powerful Baba Yago would definitely do.

The story keeps like humor lightly sprinkled in without making Koshchei one long tragic tale. Readers that know of Koshchei later adventures will find this version of Koshchei a little more human than unkillable warrior monster as he casually chats with Hellboy. Koshchei and Hellboy each comment on ridiculous moments unfolding and it helps shape the flow like any good story told at a bar.