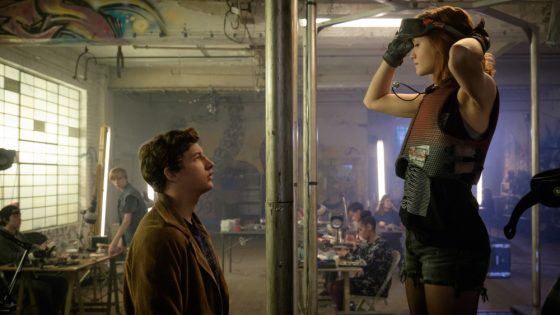 Ernest Cline’s 2011 novel Ready Player One was a fun, summer blockbuster of a book jam packed with pop culture references (which to some people makes it the worst injustice ever hoisted on humanity) and now the master, Steven Spielberg, has translated the book into a cinematic roller coaster.

Set in 2045, Tye Sheridan stars as Wade Watts aka Parzival, who, like most everyone in the run down world of the future, lives most of his life in the OASIS, a limitless VR world created by James Halliday (Mark Rylance).  After Halliday dies, a video message reveals that he left an “Easter Egg” in OASIS and the first person to find it gets his vast fortune and total control of OASIS. Wade is on the hunt along with thousands of other “Grunters” and an evil corporation IOI, led by Nolan Sorrento (Ben Mendelsohn), is sending hundreds of grunts into the OASIS to try and find it first and turn the OASIS into a paid, gated and ad packed nightmare.  There’s quite a bit of voiceover in the beginning of the movie to explain all the backstory and setup but I didn’t find it too terrible, although the movie also shows it’s capable of more subtle and smarter setups later on. Without the opening VO though, I think this movie would be almost impenetrable for normal viewers who never even heard of the book before seeing the movie, as they wonder why the hell Batman and a Ninja Turtle are running around a planet based on DOOM.  There’s quite a few changes from the book, specifically the nature of the challenges for three keys that will unlock the Easter Egg but the changes are definitely on the positive side of things. The challenges in the book were fine but if they were translated literally, would probably be incredibly boring and instead we get an insane opening car chase/race with things like Bigfoot outracing the T-Rex from Jurassic Park and King Kong or a crazily kinetic trip through the Overlook Hotel (in the book, one of the challenges was literally just saying word for word the entirety of WarGames).  The world of the OASIS is also visually stunning and there’s so much going on that it’s almost overwhelming. This is one of those movies, like, say, Wreck It Ralph, where you’ll be pausing and rewinding at home to try and spot all the cameos and references, from mainstream like Harley Quinn to much more obscure, like the Battletoads. The range of references is also wisely updated and, while the focus is still the 80’s, there’s more modern (which are vintage in the universe of the movie) references like Overwatch, Starcraft, Minecraft, Street Fighter, etc. The action is also spectacular, particularly the massive final battle where the OASIS users rally against IOI and you have things like the RX-78-2 and The Iron Giant fighting Mechagodzilla or a weaponized Chucky doll.  There’s endless debates online whether that type of stuff is fun, empty nostalgia or toxic nerd elitism, but like the aforementioned Wreck it Ralph or The Lego Movie, I get a lot of enjoyment and fun out of seeing things or characters that would never interact normally interacting.

As far as the acting goes, everyone is mostly fine.  Tye Sheridan and Olivia Cooke as Art3mis are blandly enjoyable and Lena Waithe, Philip Zhao, Win Morisaki are some fun comic relief as the rest of the “Hi-Five” clan.  Mark Rylance is delightful as ever in his latest collaboration with Spielberg, playing Halliday as basically what would happen if Garth from Wayne’s World created Apple while Ben Mendelsohn is perfect as the corporate douche Sorrento, the kind of a-hole who leaves his password lying out in the open on a sticky note and is ready to fill 80% of an OASIS user’s POV with ads.  Although he’s “persona non grata” now, TJ Miller is pretty great as i-R0k, an OASIS mercenary who is essentially Erlich Bachman from Silicon Valley if he was an assassin for hire, all pompous douchebaggery. There are some wasted talent, like apparently Black Panther breakout Letitia Wright is just in the background somewhere and Sorrento’s henchwoman, F’Nale (Hannah John-Kamen), who handles IOI’s real world operations, is never really fleshed out or interesting.  Simon Pegg is also around as Ogden Morrow, the Woz to Halliday’s Jobs.

Just like how I found the book an enjoyable popcorn flick of a novel, I found the movie version of Ready Player One to be a fun, action packed roller coaster with an incredible visual style that is jam packed to the gills with nerd culture and references that is a return to form for Spielberg in blockbuster mode, specifically the 80’s era that the characters worship and live by.  It probably won’t change the minds of haters who have decided the book is a genocide of the English language but if you liked the book or have no opinion and just want an entertaining time at the theater, definitely strap on the VR goggles for Ready Player One.