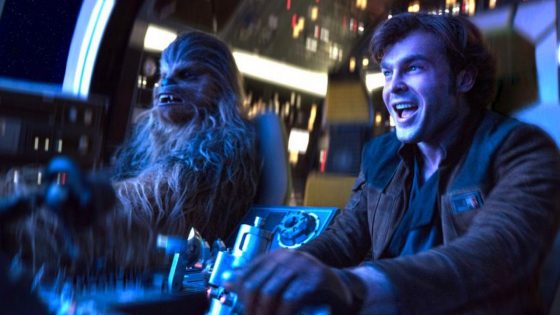 After lots of behind the scenes drama and wild rumors, the first Solo trailer came out right after the Super Bowl and it actually looked pretty cool and this new trailer continues that trend.  Young Han Solo (Alden Ehrenreich) and his partner Chewbacca join a heist job organized by criminal Tobias Beckett (Woody Harrelson) working for an even bigger and more dangerous criminal, Dryden Vos (Paul Bettany). Along with Solo and Chewie, the crew also includes Lando Calrissian (Donald Glover) and his robot partner L3-37 (Phoebe Waller-Bridge) and Qi’ra (Emilia Clarke), who has a history with Han.  Visually, the movie looks incredible with tons of things we’ve never seen before in any Star Wars movie, including an insane looking sequence on some sort of monorail/train vehicle and a chase with the Millenium Falcon in some sort of outer space storm.  Ron Howard stepped in to finish the movie after Disney removed Lord & Miller and the movie is out on May 25th, check out the trailer below.

The First Trailer for Solo is Here