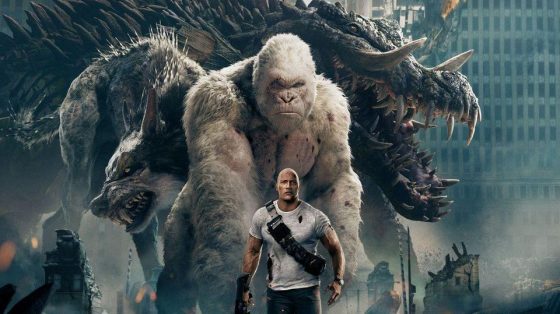 The Rock dominated the box office for his first movie of 2018 as Rampage took the #1 spot over the weekend.

Rampage made $34.5 million, the third best opening ever for a video game adaptation behind Lara Croft: Tomb Raider and Angry Birds.  It’s around $11 million more than the recent Tomb Raider reboot as well and it’s the 14th best opening for The Rock, in the range of Central Intelligence and Jumanji.

A Quiet Place dropped to number two with another $32.6 million, bringing it to over $99 million for it’s two weeks out and over $151 million worldwide and it’s outpacing most major recent horror movie, as it’s going to cross over $100 million around a week sooner that Split or The Conjuring, for example.

Speaking of horror, Truth or Dare opened in third with $19 million, which puts it 15th for openings for Blumhouse between Ouija and Paranormal Activity: The Marked Ones.  Like most Blumhouse films, it’s already made six times it’s budget so even if it nosedives in the next week, it will still be making money for the horror factory.

Ready Player One and Blockers rounded out the top 5, with the former crossing over $114 million domestic while the latter has made just over $36 million.

New releases outside the top 10 were Beirut, which came in 13th with $1.6 million from 755 theaters while the animated film Sgt. Stubby had a pretty bad $1.3 million from 1,685 theaters.