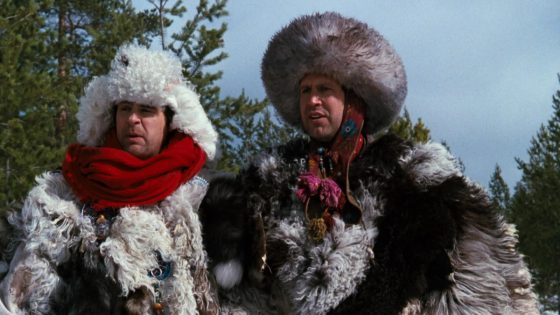 Paul McCartney delivered arguably one of the best Bond songs ever with the theme for Live and Let Die but he also contributed the title track to another, slightly less famous spy movie, 1985’s Spies Like Us.  Starring Dan Aykroyd and Chevy Chase, the pair meet during the foreign service exam for the DIA and become secret agents together, although they find out later they are being used as a decoy for actual DIA agents.  Through lots of wacky hijinks, the pair manages to stop a nuclear war and expose corrupt US military leaders.  Paul McCartney’s song came out alongside the movie and hit #7 on the Billboard charts, although strangely it was not included with the soundtrack released for the movie, which only contains the score by Elmer Bernstein.  The music video features both Aykroyd and Chase, with Aykroyd working with McCartney in the studio and Chase appearing at the beginning and end along with the requisite clips from the movie, check it out below.