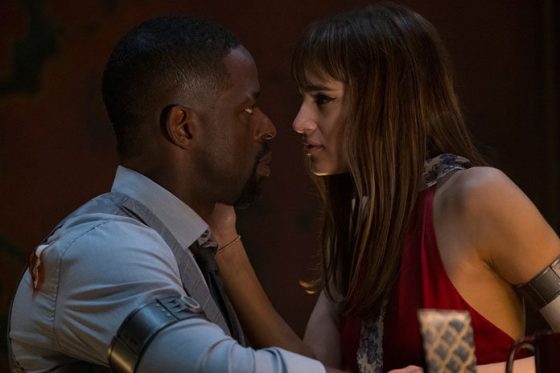 Most definitely taking a cue for John Wick’s hitman hotel chain The Continental, Hotel Artemis is an upcoming action movie from Drew Pearce, who is making his feature directorial debut after writing movies like Mission Impossible: Rogue Nation.  Sterling K. Brown stars as Waikiki, who leads a heist crew in a near future LA but his brother Honolulu (Brian Tyree Henry) is injured and Waikiki brings him and the rest of his crew to the Hotel Artemis, which is secretly a criminal hospital run by The Nurse (Jodie Foster).  Things go from bad to worse when a pen Waikiki casually stole turns out to contain a cache of insanely expensive diamonds, which draws big bad criminal The Wolf King (Jeff Goldblum) to the Artemis to take them.  Charlie Day, Sofia Boutella, Dave Bautista, Zachary Quinto, Jenny Slate, Kenneth Choi and Josh Tillman co-star and it seems like the cast and the off-kilter characters and setting will set it apart from it’s inspiration.  It’s out on June 8th and you can check out the trailer below.