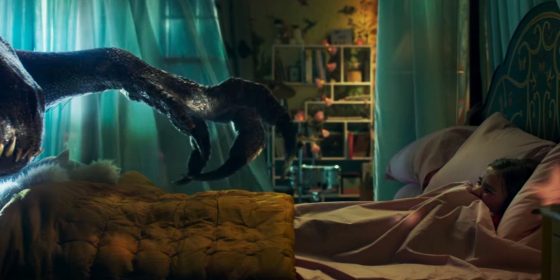 The final trailer for this summer’s follow-up to Jurassic World, Fallen Kingdom is here and reveals it’s horrific new genetic abomination, the Indoraptor.  The marketing campaign for Fallen Kingdom has gradually revealed the initial trailer’s focus on the island rescue mission led by Claire (Bryce Dallas Howard) and Owen (Chris Pratt) is only half the story and that mission was presented to them under false pretenses by evil corporate suit Eli Mills (Rafe Spall).  The dinosaurs Owen and Claire manage to save are put on the auction block and the velociraptor Blue’s DNA is used to create the Indoraptor hybrid, which seems like the primary threat for the back half of the movie as it gets loose in the gigantic mansion housing the dino auction.  The fact that movie is not entirely going to be a rescue mission on the island and is going to turn into a weird horror movie with a monster stalking a mansion definitely makes me much more interested when Fallen Kingdom arrives on June 22nd.  Check out the trailer below.