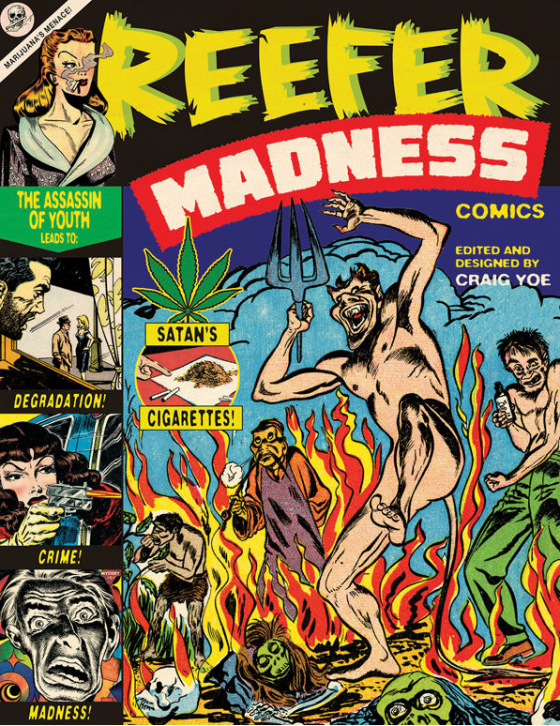 Are you interested in doobies? Spliffs? Bud? Aunt Mary? Grass? Or what the grandparents used to call it, MARIHUANA! Then prepare for some madness in your life. The miscommunication and social panic of marijuana between 1930-1960 created some of the craziest propaganda against marijuana in America. All forms of entertainment started a movement to strike fear into drug users, lumping together the crime of smoking marijuana with bank robberies or murder. Because in the 1930’s, just looking at a a marijuana product meant you had sold your soul to Satan. The comics were effected by this kind of propaganda, forcing really creative comic artist to develop some misguided material. Craig Yoe and Dark Horse Comics celebrates the era of outrages anti-marijuana propaganda in Reefer Madness, a collection of the social movement in comics that warn the youths of America about the devil’s lettuce. This collection of artwork and comics about this time had some comical stereotypes and misinformation, and focused on scaring people. Of course, these days the real reefer madness hasn’t cause society to break down as the government once thought.

Many of these comics followed two basic formulas. Innocent people that get corrupted by marijuana and bad things happen. Or marijuana smokers do bad things, and more bad things happen. In the past these stories were used to give shock value to comic readers. There are some good intentions behind a few of these comics, like the dangers of addiction and taking responsible in life. A few other stories tend to go off the rails mid way through, leading to some crazy situations. A naive young teen tries one marijuana cigarette and sudden the police are crash into their home. One big hilarious repeating element is how many times people are getting into gun fights. Every two-bit drug pusher in this comic is usually dressed in their Sunday’s best, offers free drugs, and really eager to pull out a gun.

Some of these stories are based on real life criminal events. Many of the details had been exaggerated and twisted, and even taking cartooning the faces of real people. This collection contains the works from Jerry Siegel, Joe Shuster, Jerry Robinson, Jack Kirby, Frank Frazetta, and so many more creators who would go on to develop powerful pieces to in a new age of comics. But these guys had to start from somewhere. The comic creators had the job to not only following society’s fevered message of anti-marijuana, they still has creative integrity to make sure the art suck and the story somewhat comprehensible.

Reefer Madness is a great reminder of how the world has changed since the 1930’s. Today’s cultural acceptance towards marijuana is generally positive compare to the old standard. Adults are able to enjoy marijuana without falling into a life of crime. Usually without having a fist fight and your gal breaking up, but that still happens to some people. Comic fans that love to read a piece of comic history, or movie buffs that enjoyed the terrible melodramatic film Reefer Madness, should definite check out this trade paper back.

The Pull List – American Gods: The Moment of the Storm #4

The Pull List – Xerxes: The Fall of the House of Darius and the Rise of Alexander #4