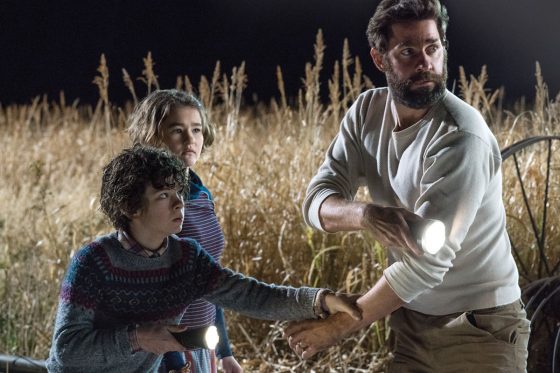 After being unseated last weekend by The Rock and Rampage, A Quiet Place returned to the top spot at the box office.

A Quiet Place took in another $22 million, bringing its total to over $132 million for three weeks out.  Worldwide, the movie has made over $204 million and it will most likely beat the total box office grosses of both Split and The Conjuring domestically.

Rampage dropped about 41% from last week’s opening and took in $21 million, bringing it to $66.6 million for it’s domestic total so far and $283 million worldwide, with $55 million from China.

I Feel Pretty did the best out of the new releases, but it was below both recent Amy Schumer starring comedies Trainwreck and Snatched with $16.2 million.  Trainwreck had about $30 million and Snatched made $19.5 million for their opening weekends.

Super Troopers 2, despite terrible reviews, had its fans show up to deliver $14.7 million, way above any expectations for the movie and more than double what the original Super Troopers made in its opening weekend back in 2002.  In fact, it’s only $4 million or so off from already making more than what the original made in it’s entire theatrical run.  It’s also easily the best opening for the Broken Lizard group.

Truth or Dare rounded out the top 5 and dropped almost 60% from last weekend’s opening with $7.9 million, putting it at $30.4 million total for it’s two weeks out which, as mentioned last week when it opened, already makes it insanely profitable for Blumhouse due to their control and knowledge of budgets and marketing.

Further down the list, Traffik debuted with a mediocre ninth place, $3.8 million opening, which is below even forgotten “people in danger on vacation” movies like Turistas or A Perfect Getaway.

In only 305 theaters, another Indian film exploded and almost made it into the top 10 as Bharat Ane Nenu took eleventh with $2.8 million.

This coming weekend is all about Avengers: Infinity War and the question of just how insanely huge that movie is going to be.