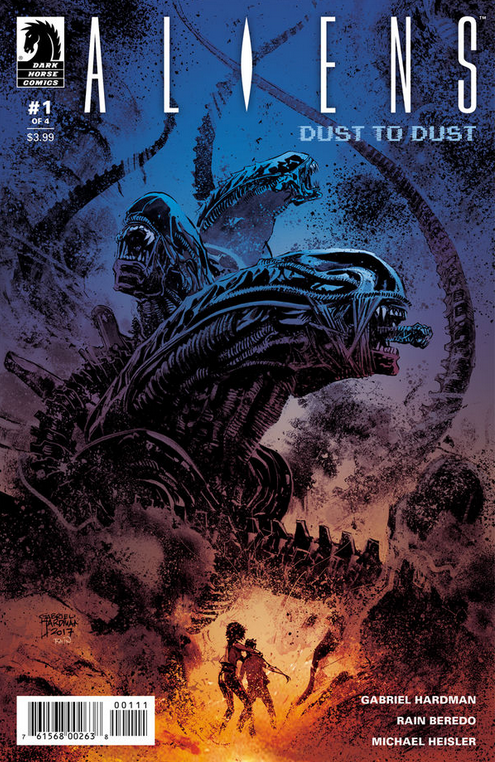 Welcome to LV-871, a terraform colony built by Weyland-Yutani Corp. It’s a large city built to occupy growing families and a stronghold for it’s military power. But the colony will all turn to chaos when the alien xenomorphs invade. Twelve year old Maxon and his mom wake up to the colony being terrorized by xenomorphs and an approaching dust storm that blankets the area. An evacuation orders have been issued, and Maxon and his mother venture into the destroyed landscape to reach departing evac shuttles. What horrors wait for the survivors to find? And what will the colony face when the dust settles.

Aliens: Dust to Dust is a 4 issue mini-series that aims to deliver a new thrilling entry in the Aliens series. The first issue begins with an intense introduction that jumps straight into the horrifying setting. Aliens begin there attack on LV-871, survivors begin to scrambling for safety and the whole colony is being covered in a dust storm. It’s a great start for a grim night. The first issue focuses on Maxon and his mother make a quick plan to head for the evac shuttle. Armed only with their wits and each other, these two hurry through the crumbling colony. These are not space marines looking for a fight, but a family trying to escape.

Gabriel Hardman is both the writer and artist, his works spans different medias and series. His vision for a suspenseful Aliens tale is well crafted and beautifully hellish. The xenomorphs are well drawn to show off their terrifying details in the folds of darkness, and the ruined surrounding gives an additional dramatic flair for the survivors to handle. Alien fans that are looking for more close encounters with xenomorphs should be interested in check out this new series.