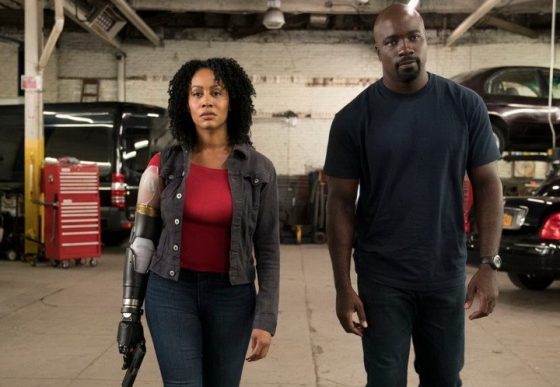 After helping the Defenders save NYC from destruction at the hands of the Hand ninja clan, Luke Cage is back to protect the streets of Harlem but he may have met his match in the form of Season 2’s new big bad, Bushmaster (Mustafa Shakir).  Having cleared his name and protected both Harlem and the entire city, Luke (Mike Colter) is now a well known celebrity and hero of the people but there are still evil elements in Harlem, like the aforementioned Bushmaster, who seemingly has the same strength and indestructible skin as Luke, or the returning threats of Mariah Dillard (Alfre Woodard) and Shades Alvarez (Theo Rossi).  Luke doesn’t have to battle these threats alone as he’s got allies like Misty Knight (Simone Missick), who has a fancy new robot arm, Claire Temple (Rosario Dawson) and Danny Rand aka Iron Fist (Finn Jones) (Although we probably aren’t going to get a full on Heroes for Hire team-up).  The late, great Reg E. Cathey also joins the cast as Luke’s father, James Lucas, in the final role he filmed before his death in February of this year.  All 8 episodes of Luke Cage Season 2 will arrive on June 22nd on Netflix and you can check out the trailer below.