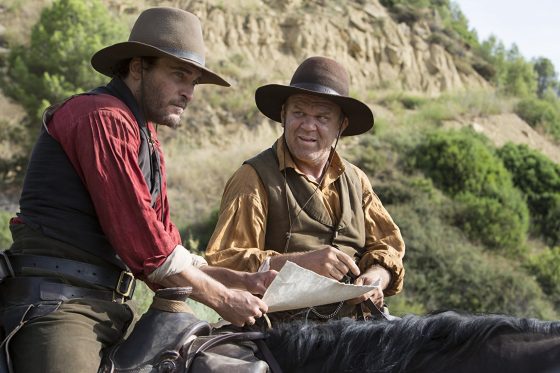 A pairing you wouldn’t of thought of, John C. Reilly and Joaquin Phoenix actually look like a pretty great duo playing wild west hitmen the Sisters brothers this fall.  Joaquin Phoenix is Charlie and John C. Reilly is Eli, whose latest target is a gold prospector (Riz Ahmed) who has stolen something valuable from their employer.  Jake Gyllenhaal plays Hermann Kermit Warm, who seems to be working with the Sisters to keep the target in one location but turns on them when he sees that the prospector, Morris, has seemingly discovered a way to highlight gold in rivers without having to pan for it.  Rutger Hauer, Creed Bratton and Carol Kane co-star and it’s directed by Jacques Audiard, who directed critically acclaimed films like Rust & Bone and A Prophet, based on a book by Patrick Dewitt.  The movie seems like it’s going to have a Coen Brothersesque sense of dark humor and the cast is fantastic.  It’s out sometime this fall and you can check out the trailer below.

The Symbiote Remains Unseen in the first Venom Trailer

A Million Ways to Die in the West Trailer