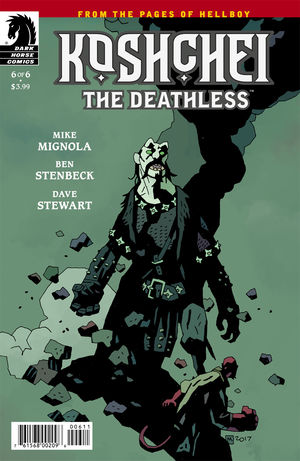 Koschei recounting of his past adventures is at it’s end. Forced to carry out Baba Yaga’s biddings, Koschei tells Hellboy his side of the battles the two shared. Being a worthy opponent, Hellboy had foiled Baba Yaga’s plans and had beaten Koschei a few times. Their last encounter broke the grip of the Babay Yaga over a possessed Koschei, but had sent Koschei straight into the underworld. Wandering the endless landscapes, Koschei had see many strange sights and met the different inhabitants, where he had stumbled upon Hellboy and the tale has come full circle. But Koschei journey is not over yet, he has yet to restore his soul and see on the hunt for the missing goat. What wonders await him and will he find the peace he has been seeking?

First introduced as a unkillable villain, Koschei had many secrets and mysterious about his bond to the Baba Yaga. Often portrayed as a mad king warrior, this version is more sympathetic to Koschei reason. Facing tragedy after tragedy, Koschei eventually becomes a circumstantial villain to Hellboy. Koschei main objective after his rebirth was to ensure that his soul would be saved. All the fighting and killing can corrupt his mind and body, but his soul, the last reminder of his humanity, would be untouched.

The 6th and final issue brings the series to an end, giving a detail background to Koschei and explaining the the absence appearance in the main Hellboy series timeline. This series focuses more on the journey than the destination, even when the destination goes into hell. It’s great read to learn about the rise and fall of Koschei, and his connections with Hellboy. Mike Mignola and Ben Stenbeck leave the Koschei The Deathless in a positive direction, opening up for more opportunities to see bring back the misunderstood warrior.