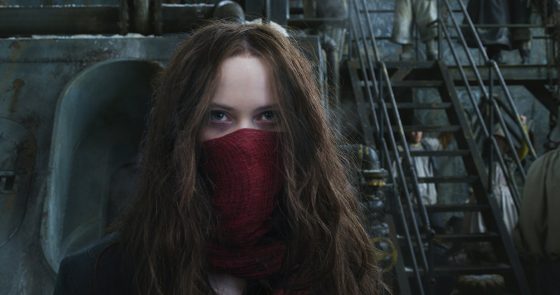 After a brief teaser, the first full trailer for Mortal Engines dives into more of what exactly is going on in this crazy future world.  Thousands of years after the apocalyptic “Sixty Minute War”, humanity has reformed around giant mobile cities where the largest, like London, chase down and swallow up the smaller ones.  Hester Shaw’s (Hera Hilmar) city is captured by London, which puts her face to face with the man who killed her mother, Thaddeus Valentine (Hugo Weaving), who is also in possession of a weapon that could destroy any city and willing to use it to make London the ultimate power in the world.  Hester teams up with other freedom fighting fugitives and looks to stop Thaddeus.  Robert Sheehan, Frankie Adams, Stephen Lang, Caren Pistorius, Colin Salmon, Joel Tobeck and Leila George co-star and the movie is directed by Christian Rivers, who has worked with executive producer Peter Jackson since Dead Alive on art design and storyboards, and is based on a series of books by Philip Reeve.  It looks like a potentially cool entry in the post-post apocalypse genre that has recently given us things like Horizon Zero Dawn and Into the Badlands and it’s out on December 14th.  Check out the trailer below.