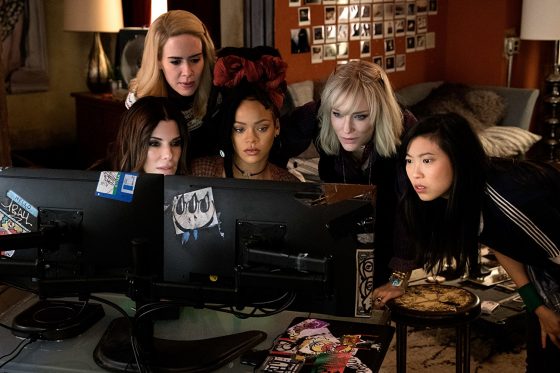 Ocean’s 8 took the top spot at the box office and had the largest, unadjusted, opening for the Ocean’s franchise.

Ocean’s 8 took in $41.5 million along with another $12 million international for a worldwide gross of $53.5 million.  Unadjusted for inflation, the closest opening to 8 was Ocean’s Twelve, which made $39.1 million but adjusted, Ocean’s 8 is behind the previous trilogy, being closest to Ocean’s Thirteen, which would have made $48 million in today’s money.  It was the third best opening ever for Sandra Bullock behind Gravity and Minions and the 11th best opening for Cate Blanchett.  Finally, it was director Gary Ross’ second best opening behind the first Hunger Games movie.

Solo dropped to second with another $15.2 million, bringing it to $176 million and it only made another $11.3 million worldwide, bring it to $312.8 million total so far, over $100 million off from where Rogue One was just domestically and light years away from where The Last Jedi and The Force Awakens were at the same time frame.  The movie will lose at least $50 million for Disney and potentially more if the movie’s final opening in Japan at the end of month goes incredibly poor.

Deadpool 2 dropped to third with another $13.7 million and has made over $278 million so far, although it’s been consistently about $30 million behind it’s predecessor every weekend since release.  The movie has made over $655 million worldwide in its four weeks out.

Hereditary exploded beyond expectations riding fawning reviews from critics and had A24’s biggest opening ever with $13 million, $5 million more than the previous highest opening for A24 courtesy of The Witch.  It’s also currently the highest opening and most money grossed so far by any of the big Sundance 2018 movies.

Infinity War rounded out the top 5 with another $6.8 million, bringing it to over $654 million domestic and just the barest sliver away from crossing over $2 billion, which is an inevitability now and will join Avatar, The Force Awakens and Titanic as one of the only movies in history to cross that barrier.

Further down the list, Hotel Artemis bombed with $3.2 million in 2,407 theaters.  It’s in the top 50 for worst openings ever in the 2,000 to 2,499 theater category but at #46 between City of Ember and Early Man.  Audiences also were not really on board either, giving it a C- Cinemascore, so it will probably nosedive horrifically next weekend and be out of the top 10 in extremely quick fashion.  Fellow bomb Action Point is already out of the top 10 after barely making it in last weekend for its debut, dropping to 14th place and only making less than $1 million ($880,000 to be exact, which means $433 per theater).

Not arriving until the 22nd, Jurassic World: Fallen Kingdom did debut worldwide and made $151 million, including record breaking openings in Hong Kong and South Korea.  Jurassic World made $316 million its opening weekend internationally but, and we may be wrong, but it seems like it was in more countries.  It’s not clear if this will indicate the same record shattering performance as Jurassic World for Fallen Kingdom but it’s a promising start.