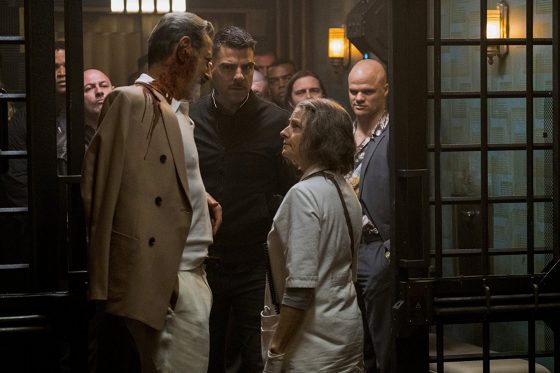 John Wick has had a tremendous impact on the action genre following the release of the first two chapters, allowing more stuntmen to get behind the camera a la David Leitch and Chad Stahelski to get behind the camera or pushing action sequences forward with crisp choreography and one shot takes.  Hotel Artemis is the latest movie to try and replicate the Wick franchise, although it’s more interested in the shadowy underworld aspects than the action, to it’s detriment.

Hotel Artemis stars Jodie Foster as “The Nurse”, who runs a secret criminal hospital hidden as the titular rundown hotel in the future Los Angeles of 2028.  The hospital is member’s only and access is allowed via an implanted chip in a person’s forearm. Sterling K. Brown plays Waikiki (A codename based on his assigned room at the Artemis), a bank robber who is forced to bring his brother Honolulu (Brian Tyree Henry) to the Artemis after a shootout with LAPD riot police (LA has erupted in riots since a private company took over the water supply and the poor are unable to afford clean water in one of the movie’s background details).  There’s also Nice (Sofia Boutella), an assassin recovering from a bullet wound, Acapulco (Charlie Day), an asshole arms dealer who had a bad facial wound, along with Everest (Dave Bautista), The Nurse’s orderly/assistant. The already tense situation ramps up when it’s revealed The Wolf King (Jeff Goldblum), the criminal kingpin who owns both the Artemis and most of Los Angeles, is on his way for treatment and his son Crosby (Zachary Quinto) is barricading the hotel to prevent any new patients from stealing the last remaining room.  The main issue with Hotel Artemis is that it’s a movie that feels entirely like build up but with no payoff. There are hidden agendas and some attempts at intrigue but it really feels like it’s just spinning its wheels until Goldblum arrives and, even then, nothing really comes of it. The pieces are in place for some sort of big confrontation or twist or a plan clicking into place but there’s just a thud of a half hearted action sequence for Bautista and Boutella and the movie just sort of ends.

The movie is more concerned with trying to replicate the feel of The Continental from John Wick and it’s various amenities and rules and the familiarity of the various patrons but the John Wick movies did it in a much more stylish and smooth manner where a single line of dialogue would give you all the context you needed and every new development about what The Continental provides left you intrigued and hungry for more.  Artemis is more blunt, just throwing the rules on the wall and having people explain connections or backstory through expository dialogue and it feels like there isn’t much more going on than what we see. The sci-fi elements also don’t really add much and really just feel like writer/director Drew Pearce just binged Black Mirror before writing the script with things like ocular implant cell phones and 3D printed organs but it’s all surface layer flavoring that doesn’t contribute to the plot or the setting in any real meaningful way. There’s also a dash of The Purge with a dark, grimy look and the rioting that’s happening around the city.

The cast assembled is great and most of them do a great job with the little they have to work with.  Jodie Foster is fantastic as The Nurse, who is given the most background and characterization but her backstory is fairly rote and there’s a “twist” that fall pretty flat but she has a great gruff but caring manner.  Sterling K. Brown is great as always too but barely has anything to do in this movie besides sullenly walk around the Artemis and peer around corners. The rest of the cast are all saddled with characters that are pretty one note but the biggest crime is definitely casting Jeff Goldblum as a criminal kingpin called The Wolf King and not letting him go full Goldblum on it.  The movie literally gives a countdown to his arrival into the movie and then utterly fails to live up to it’s one hype and talents of a national treasure like Goldblum.

Despite a great cast and a fairly intriguing premise, Hotel Artemis is just a mediocre attempt to replicate part of the John Wick formula with a dash of some Black Mirror futurism on top.  The world is just not as interesting as the shadowy assassin world of John Wick and The Continental and the movie just feels entirely like setup with no payoffs and definitely none of the incredible action that is the other half of what makes John Wick such an incredible franchise.