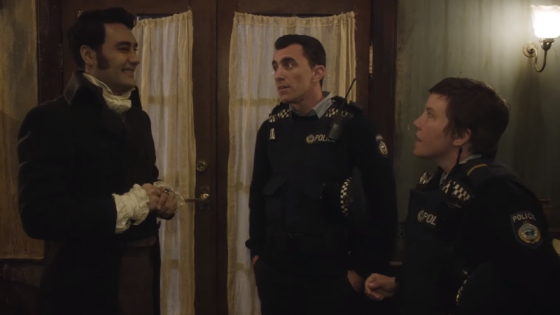 One of the many, many great moments from the brilliant and hilarious What We Do in the Shadows is when our gang of lovable vampires gets a visit from the local police.  The guys use their powers of hypnosis to cloud the cops’ minds to anything out of the ordinary happening but that duo, Officers Minogue and O’Leary, will have their hands full with all sorts of paranormal phenomenon in the upcoming New Zealand TV show, Wellington Paranormal.  Reprising their roles, Mike Minogue and Karen O’Leary co-star and are joined by Maaka Pohatu as their commander, Sgt. Maaka and they get involved with demonic possessions, ghosts, werewolves (not swearwolves) and other things that go bump in the night in a COPS/mockumentary style comedy.  Jermaine Clement and Taikia Waititi are producing the show and are possibly going to cameo as their Shadows characters at some point.  The show debuts on New Zealands’ TVNZ 2 on July 11th but there’s currently no plans for a US release on streaming or broadcast.  Still, check out the teaser below and, if you live in New Zealand, let us know how it is.

There’s Something Strange in the First Ghostbusters Trailer