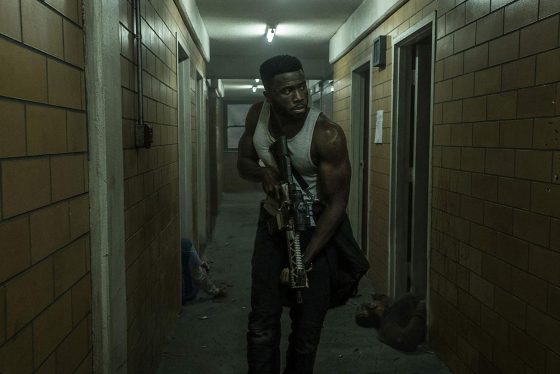 The Purge series started out extremely rough with it’s first entry but with the next two sequels, the series transformed into a schlocky and fun action/horror franchise with an angry opinion on all the hot button political and social issues of the day. The First Purge goes back to the beginning to show all all the insanity got started but instead of giving interesting backstory to flesh out the world, it’s mostly a fine, middle of the road entry in the franchise.

In a slightly shittier version of present day America, the New Founding Fathers become the third political party and get their candidate elected, promising to fix the social and political issues that are destroying the country.  All of this is handled in about a 1 minute long montage before the credits, so if you were hoping for more backstory or info on the NFFA, you’ll be leaving disappointed. The NFFA’s solution is, obviously, The Purge, or The Experiment as it’s called here, and it’s created by Dr. Updale (Marisa Tomei) and overseen by her and Arlo Sabian (Patch Darragh), the NFFA chief of staff.  Staten Island is chosen as the test site and is blockaded for the 12 hours of the experiment and any citizens who stay on the island the entire time will be paid $5,000. Anyone who “participates” further will get more compensation and everything is being recorded via Black Mirroresque contact lenses. Our main heroes are Nya (Lex Scott Davies), an activist who is raising her brother in the Park Towers block apartments and organizing a safe haven at the local church during The Purge, Isaiah (Joivan Wade), Nya’s brother who decides to use The Purge to get revenge on a dangerous psycho named Skeletor (Rotimi Paul) who attacked him earlier and Dmitri (Y’lan Noel), the local gang kingpin and Nya’s ex.  The movie is definitely lacking thanks to the missing grizzled bad-assery of Frank Grillo but the main protagonists are all fairly likeable and easy to root for, especially against the cartoonish evil of the NFFA, who eventually send in kill squads of groups like the KKK in when the residents of Staten Island are more interested in sex and partying than ripping each other to shreds.

The First Purge backpedals slightly back to more of the horror side of the franchise’s action/horror balance as, with the exception of Dmitri, the protagonists are just normal people and not action heroes, so there is more hiding and just trying to survive the night instead of blasting their way through a la Leo Barnes (Grillo).  The franchise’s action evolution does come into play for a pretty great finale as Dmitri goes full action hero and has his own mini version of something like The Raid or Dredd as he has to fight his way up the Park Towers building and take out the roving mercenary squads that are killing everyone in sight and there’s also great scene where Dmitri and his lieutenants go full on John Wick on some KKK members in slow motion and through smoke that has style to spare (although weirdly it’s the only scene like that in the movie). Since this is the very first Purge, things are not as creatively grisly as the films that follow it in the timeline, there’s no defaced Lincoln Memorials or psychopaths in patriotic costumes running around and there’s no real stand out or creative kills either although Skeletor is probably the most memorable and active villain yet in the franchise, responsible for the first kill ever in Purge history and gleeful in his rampaging.  The one new twist of creativity is the contact lenses, which adds an eerie neon blue or green tint to everyone’s eyes and you will just see these eyes in the background, in alleys or peeking out of windows. There is also some really ham fisted attempts to establish backstory, like newscasters commentating on a lot of people wearing masks and what it means.

The First Purge is a solid entry in the franchise but fails to deliver on its place as a prequel to offer some interesting backstory and world-building to the universe.  The NFFA are still mostly a racist and evil cipher and the ending is a foregone conclusion; our protagonists are not going to miraculously stop The Purge from happening and the actual creation and execution of The Purge is not very interesting either.  There’s plenty of solid Purge action if that’s what you are looking for and it presses even harder into the social and political text, with lots of blatant references to current events but it doesn’t top the grindhousey, old school schlock of Anarchy or Election Year.

Get Your Votes in For The Purge: Election Year