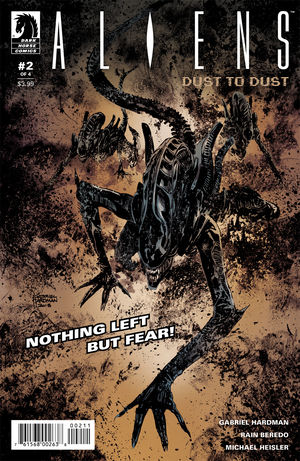 After escaping the city area of Trono, Maxon and his mother join a party on an evac ship. But there is no safe passage through the dust storm or for the people inside the ship. As the survivors only had a moment to regain their breathes, a xenomorph bursts out, while the ship is too heavily damaged to reach the atmosphere. With a failing ship and a panic crew, the ship comes crashing pass the terraformed areas and into the barren deserts. Suffering loses and only supplied with limited equipment, the survivors journey there the barren lands while the dust storms clocks the rampaging xenomorphs.

Issue two of Dust to Dust encases the fear and panic of a xenomorph attack into an small area.  It’s interesting to see what happens when an alien, gravity and tight spaces meet. Traditionally, most xenomorph attacks happen in wider areas like cities, jungles or huge space crafts. But this chapter shows the mania of a single xenomorph darting around a cabin room, causing the passengers who are secured into place dealing with the terror.

This series is focus on Maxon survival of this incident, so most of the great details about the city, the science and space marines aren’t highlight of this tale. Gabriel Hardman vision for this sci fi, coming of age tale pits Maxon in extreme events that forces Maxon to face some horrific nightmares. Barely understanding the world around him, aliens that want to destroy and a corporation that is looking after the bottom line, being a twelve year old is really terrible in the future. Maxon survivor tale just only began and the next month promises more horrors for the next issue.