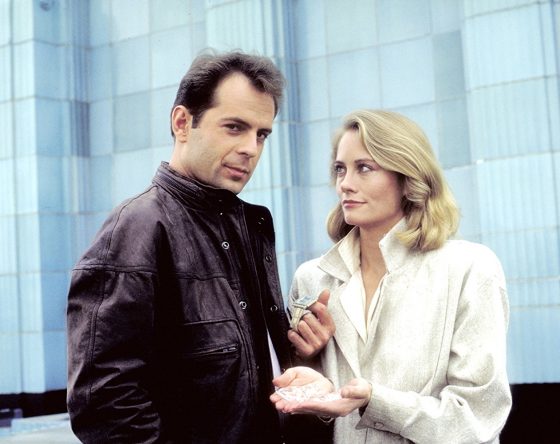 Long before he was the grumpy old man who seemed to take any role simply for the paycheck and even before he was John McClane, Bruce Willis was the charmingly roguish private eye David Addison on ABC’s smash hit comedic crime show, Moonlighting.  Debuting in 1985, Bruce co-starred with Cybill Shepherd, who played former model Maddie Hayes.  Maddie discovers that her accountant has embezzled all her liquid assets, leaving her with only a bunch of failing businesses, one being a private detective agency.  After their first case together, David and Maddie become bickering yet sexual tension charged partners, taking on various cases until the show was cancelled in 1989.  The theme song was sung by jazz and pop singer, and multiple Grammy winner, Al Jarreau, and it was released as a single from the Moonlighting soundtrack album.  The album hit #50 on the Billboard album chart and “Moonlighting” the song hit #1 on the Adult Contemporary singles charts and #23 on the Billboard 200.  Both Bruce and Cybil performed songs on the album as well and “Moonlighting” got Jarreau two Grammy nominations for Best Male Pop Vocal Performance and Best Original Song from a Movie or Television Series.  The video features Jarreau hanging in the halls of a fancy hotel or office building while clips from the show are revealed behind elevator doors or just intercut normally and the song is so wonderfully smooth it’s like caramel for your ears.  Check out the video below.