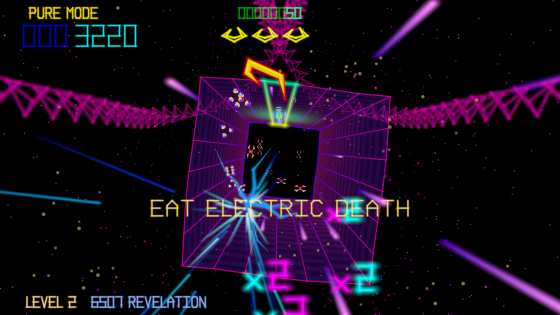 The latest edition of Gamebox 2.0 is here and while triple AAA releases have slowed to a crawl for the summer, there are still tons of awesome smaller games have been released recently that will test your reflexes, old school arcade, fighting and survival skills.

Tempest 4000:  Released this week from Atari and developed by Llamasoft and it’s quirky but brilliant founder Jeff Minter, Tempest 4000 is the fourth proper game in the Tempest series following the iconic 1981 arcade classic and it’s sequels on the Jaguar and the…Nuon(?).  Tempest 4000 keeps the same classic gameplay as it’s predecessors as you control The Claw spaceship and blast your way through various vector fields filled with dangerous enemies.  The full rotational movement is back as The Claw can move all the way around the edge of the playing fields and things like the Superzapper are back as well, which clears away all enemies on the screen.  If you’ve played Minter’s other recent games like Space Giraffe or Polybius, you know how insane the visuals can get and Tempest 4000 is no exception. 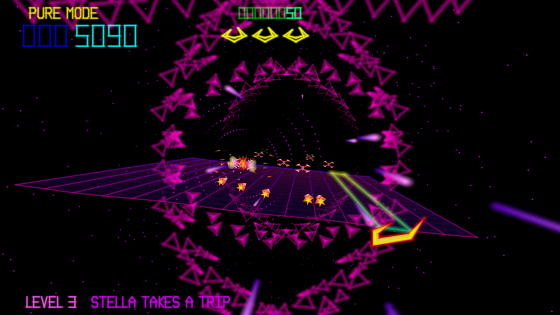 It’s sensory overload in the best way possible as seemingly millions of colors flash across the screen and phrases like “Eat Electric Death” pop up on screen.  It has an old school look but with a crispness and level of visual effects that were not even close to possible on the original Tempest or even on the two prior sequels.  Tempest is an iconic arcade classic for a reason and Tempest 4000 brilliantly continues the tradition while ramping up the visual spectacle and it’s 100% worth playing for both Tempest fans and just fans of old school arcade action in general and it’s available right now on PC, PS4 and Xbox One.

You play as the Rifter, who is trying to destroy a series of mysterious towers on a broken planet by making it to various rift points and shattering them.  The game supports a variety of control schemes, including keyboard and single and dual stick controller modes but, and it’s probably just me, I could never really get comfortable with the swing mechanics on any of them.  There were a few levels where I got into the flow but those moments were fleeting and I could never get a feel for the momentum or movement needed to master the grappling points.  I feel like there will be a bunch of speedrunners who will make this look easy and it seems like the perfect game for some future Games Done Quick marathon.  The soundtrack is pretty great as you would expect from a game inspired by the synthwave genre and the look is that neon soaked 80’s visual look where there’s like a sunset going down over a neon grid.  If you’re into hardcore platformers and can get a handle on the swing mechanics, Rifter is on Steam right now.

Outpost Zero: Published by TinyBuild and developed by Symetric Games, Outpost Zero went into Steam Early Access last week (7/12) and is the latest entry in the first person survival genre in the vein of Ark or Rust.  In Outpost Zero, you are a robotic scout sent to the planet Gaiya to colonize it for humans and you’ll do this by gathering resources, containing the local, usually hostile, wildlife and exploring the world. 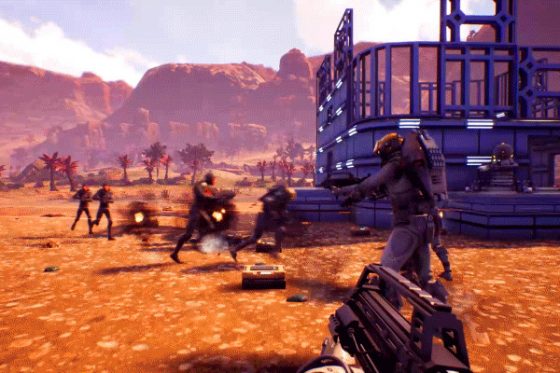 If you’ve played other survival games before, you should feel right at home here as you’ll use an axe to gather resources from trees and mineral deposits and then turn those into buildings and tech that will let you build better weapons and upgrades.  The thing that really sets Outpost Zero apart though is that you have AI drones by your side and you can build a number of them and set them off to do various tasks, which can streamline processes.  You can designate a few drones to gather resources, freeing you up to go explore or build. You can even setup things like mining outposts and get a whole economy of drones going for you.  You can build your own corporation and team up with friends, allying or battling other player’s corporations and teaming up to build massive bases.  I’ve said before, the survival genre doesn’t really interest me at all but from what I’ve played and seen, Outpost Zero really sets itself apart with the AI drone system and the world of Gaiya is beautiful and seems like it would be extremely interesting to explore if you are looking for a new world to survive on.

Garage: Bad Trip: Originally hitting on Switch as a timed exclusive, Garage: Bad Trip arrived on Steam from TinyBuild on July 6th and it’s sort of a horror spin on Hotline Miami.  Using the same overhead, twin-stick style as Hotline and with the same hardcore combat, Garage puts you in the shoes of Butch, a drug dealer who wakes up from the trunk of a crashed car in the depths of a massive parking structure and has to find a way out while fighting off the horrific zombies and other creatures roaming the dark hallways.

Butch can kick and punch and slowly gathers weapons like axes and eventually firearms, although ammo is in short supply so there’s a survival horror element of deciding if you should use bullets or save them and use your melee weapons.  The whole game has a b-movie 80’s horror vibe and the pixel work is great and it will definitely put up a challenge if you’re looking for one, as even seemingly lowly enemies like infected rats can quickly wipe you out if you are not precise and efficient with your attacks.  Either on Switch or Steam, if you want a hardcore, pixel art survival horror game, definitely check out Garage.

Runbow: Hitting in 2015 on the WiiU and Steam, Runbow has finally hit the three major consoles, bringing it’s unique color based party platforming action.  Delivering local or online action, Runbow is a racing platformer with the incredibly unique and cool gimmick of a constantly shifting background color that reveals or removes platforms and obstacles from the level.  For instance, if a there is a dark green platform visible, it will disappear when the dark green background wave comes in.  The background shifts every few seconds and it really changes how you approach each level, as you may need to wait until you think the background pattern will hit in the perfect way to progress. 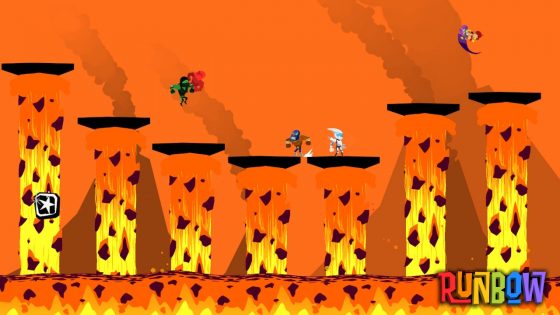 There are modes like straight up races and King of the Hill modes for multiplayer but it also has an extremely cool single player mode where you progress across four different themed stages and you unlock two new stages for each completed one.  This way, you can choose your own path to the boss showdowns of each world and you are also not stuck on a particular level if it proves too difficult, you can just quit out and try a different level and take a new path to the end of the world.  It’s a brilliant design and one I would love to see other games in this genre take up because some of them really get you bashing your head against the wall on tough levels.  The game also has a delightfully retro look and sound and there are tons of unlockables, including guest characters like Shantae, Shovel Knight and CommanderVideo.

Hypnospace Outlaw Beta: We got a chance to check out a demo/beta version of the upcoming “game”(?) Hypnospace Outlaw, which will be a huge shot of nostalgia to anyone who spent extensive time on the web circa 1999, especially in places like Geocities.  The premise of the game is that there is a new network called Hypnospace created that allows users to interact with it while sleeping.  There are personal blogs, businesses, educational sites and more and you have volunteered to be an “Enforcer”, who is assigned cases by the corporation that runs Hypnospace to look out for violations and illegal activity.  For instance, there may be users violating copyright by putting stolen images on their site or someone may be using harassing behavior on their blog.  The fake websites are insanely accurate to what was going on in the sort of Geocities/MySpace era of the net, with eye jarringly awful color combinations and backgrounds, terrible animations pasted with no sense of design and awful, autoplaying music but it’s all done on purpose and it’s hilarious to just kind of click around and see all the parodies and weirdness that is out there. The game is looking at a possible release late this year.

Icons: Combat Arena: Icons: Combat Arena is a new “free to play” fighting game that takes pretty much all it’s cues from Super Smash Bros.  The levels, the way the moves work and even the shield orb that you can use to block are ripped right from Smash but without the iconic Nintendo roster to play as.  The characters available do have some cool designs but are also kind of generic and, probably the biggest detriment of the game, there are only three characters available in the base download and it’s $25 to unlock the rest of the roster and “future characters”.  In a game like this, it seems like it would be better just to sell the game straight up with the roster unlocked than trying to do lootboxes and other microtransactions and the Steam community seems to agree, hammering the game with negetive reviews.  It does play fine with the same control scheme as Smash; one button is the normal attack and the other is for specials and you use a direction on the joystick to modify them and there is a throw and block as well. 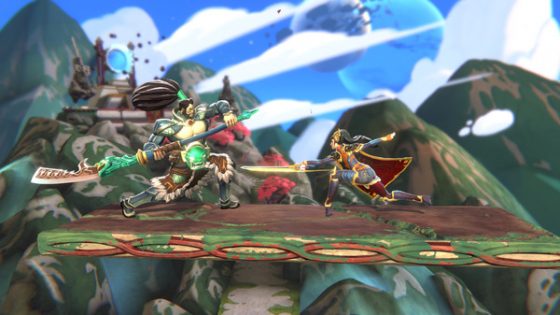 With Smash Bros Ultimate on the horizon, this game is kind of irrelevant unless you don’t have a Switch and only game on the PC but there’s also games like Brawlhalla that do the Smash Bros thing with a more interesting visual style and more positive reception.  It is technically “free” so if are curious, it won’t hurt anything to download it but just now it will take some cash if you want to dive deeper into it.

Lumines Remastered: Considered by many to be one of the greatest puzzle games of all time, Lumines is back on every console and PC in a newly mastered version of the original game.  One of the main reasons to buy a PSP, Lumines has gotten various versions and sequels across a slew of consoles and mobile devices but this is the OG original that started it all.  An action puzzle game, the main gimmick of Lumines is it’s scrolling timeline, which clears any matched colors that you have turned into squares and then drops the rest of the blocks on top of it down to hopefully make more blocks and get combos to build your score. 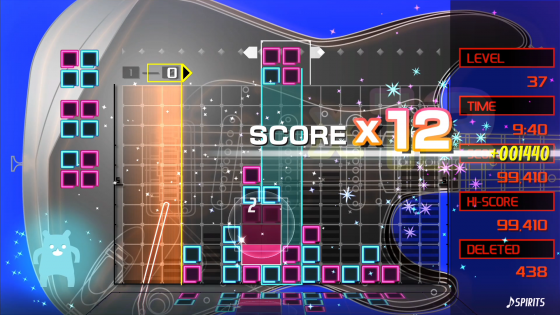 You move the next block that will drop across the top of the screen and can rotate it and then drop it in place.  There’s also the element of the music that accompanies the action and you’ll hit different “skins” that changes the look of the blocks, the song and the speed of the timeline, which goes to the beat of the song.   I 100% recognize that Lumines is an incredible puzzle game but I’ve always had trouble wrapping my brain around it’s mechanics, especially setting up the blocks so they drop and make more blocks but I’ve also not really played a ton of it, so maybe that is a skill that builds with time.  If you love Lumines, this is the same game you loved in the past with crisp HD graphics and available on any system you choose (although it seems like the Switch would probably be the top choice).