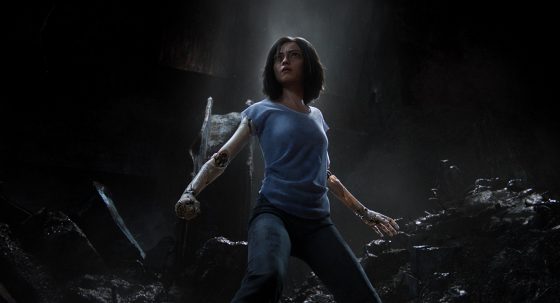 Based on the classic manga by Yukito Kishiro, James Cameron and Robert Rodriguez have teamed up to bring Alita: Battle Angel to the big screen.  Cameron is producing and worked on the script while Rodriguez is directing and the movie stars Rosa Salazar as Alita (in a still weird looking “Final Fantasy: The Spirits Within” motion capture CG performance), who is an advanced robot from the distant past who awakens in the future with no memory of who she is, who created her or her full potential.  A kindly doctor, Ido (Christoph Waltz) is the one who discovers Alita and tries to keep her safe and slowly integrate her into the future society but an evil corporation led by Mahershala Ali discovers Alita’s existence and sends a squad of deadly robotic assassins to destroy her.  Eiza Gonzalez, Jennifer Connelly, Ed Skrein, Jackie Earle Haley, Michelle Rodriguez, Casper Van Dien and Jeff Fahey co-star and it arrives on December 21st.  Check out the new trailer below.

Action Hero of the Week: Alita