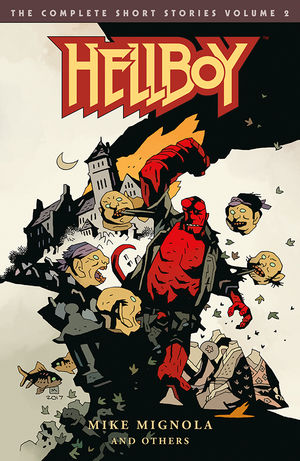 Ever since Hellboy was made an official member of the Bureau for Paranormal Research and Defense (B.P.R.D) in the 1950’s, he took many assignments that would give him the experience to take on the villainous forces of Grigori Rasputin and the Baba Yaya. No longer a rookie agent, Hellboy would go on to face many challenging foes and strange events.  Hellboy: The Complete Short Stories Volume 2 covers Hellboy’s side adventures from 1961-1993. This trade paperback covers seventeen single stories. The chronological order is The Hydra and the Lion, The Troll Witch, The Baba Yaga, The Sleeping and the Dead, Heads, Goodbye, Mr. Tod, The Varcolac, The Vampire of Prague, The Bride of Hell, The Whittier Legacy, Buster Oakley Gets His Wish, They That Go Down to the Sea in Ships, A Christmas Underground, Dr. Carp’s Experiment, The Ghoul or Reflections on Death and the Poetry of Worms. In the Chapel of Moloch, Makaoma or A Tale by a Mummy in the New York City Explorer’s Club on August 16, 1993.

Written to accompany the main story arcs of the Hellboy series, these adventures are mostly one-shot tales that involve Hellboy’s small, but problematic investigations. However, there are connections to greater plot elements in the main Hellboy storyline; typically referencing characters or foreshadowing future events. In the story The Baba Yaga, Hellboy had a fierce fight with the demonic witch, Baba Yaya, resulting in her losing an eye in 1964. This weakened Baba Yaya and started her deep hatred of Hellboy. This will set off a chain reaction that will later come full circle many years later in another story arc. In these stories, Hellboy proves himself to be a capable B.P.R.D agent, taking on assignments alone. The stories offer a glimmer of conflicting interest between Hellboy’s responsibility as a B.P.R.D agent and a creature from otherworldly origins. Stories like The Varcolac, Dr. Carp’s Experiment, and Makaoma push Hellboy into facing his destiny of becoming a herald of destruction to the world. While stories like Goodbye, Mr. Tod, The Bride of Hell, and Buster Oakley Gets His Wish, shows off the protector nature of Hellboy, where he fights to keep good people safe.

The creative team of Mike Mignola, Josh Dysart, Richard Corben, P. Craig Russell, Kevin Nowlan, Scott Hampton, Jason Shawn Alexander, all bring a unique style and tone to each story. Some tales are lite horror, focusing on the humor and the fast quips of Hellboy making fun of the situation. And some tales lead on to the gothic horror, where ghostly creatures come to haunt the lands. The use of different monsters from around the world is very entertaining, as Hellboy fights more than just typical vampires and “science experiment gone wrong”. The use of Japanese, Russian and African mythical creatures gives some of Hellboy’s adventures a cultured experience and puts Hellboy in some strange situations. There aren’t many comic collections with Hellboy trying to punch a flying rokurokubi. Comic fans looking to know every adventure of Hellboy shouldn’t miss out on this collection. These small, fast-paced stories are entertaining to read and add great depth to the lore. Longtime readers that have miss parts of Hellboy’s history should definitely pick this up to fill in the gaps between story arcs and be well versed in the Mignola universe.