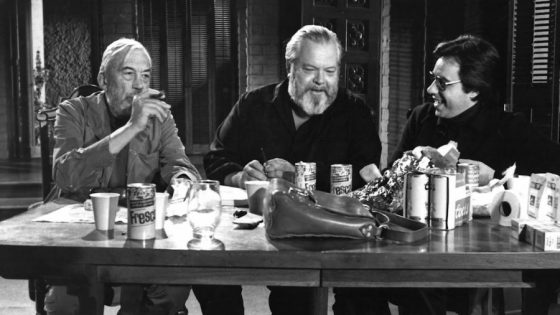 Shot between 1970 and 1976, The Other Side of the Wind was left unfinished by the legendary Orson Welles but for over 40 years, Peter Bogdanovich and producers Frank Marshall and Filip Jan Rymsza have been trying to navigate all the legal hoops and assemble a version of the film that could finally be released to the public and it will arrive on Netflix (and select theaters) in November.  The movie stars John Huston as director JJ “Jake” Hannaford, a legendary director who returns to Hollywood in the 70’s after years away in Europe and tries to create a film called The Other Side of the Wind that will be his comeback.  The movie is a satire or mockumentary that comments on the classic Hollywood system that Welles created Citizen Kane in and the changes that were occurring with the “New Hollywood” movement in the 70’s that gave rise to directors like George Lucas, Martin Scorsese, and Steven Spielberg.    This is a massive piece of film history that will be available in an easily viewable format and if you’re a cinephile, this will probably be a must-see.  It’s out on November 2nd and you can check out the trailer below.