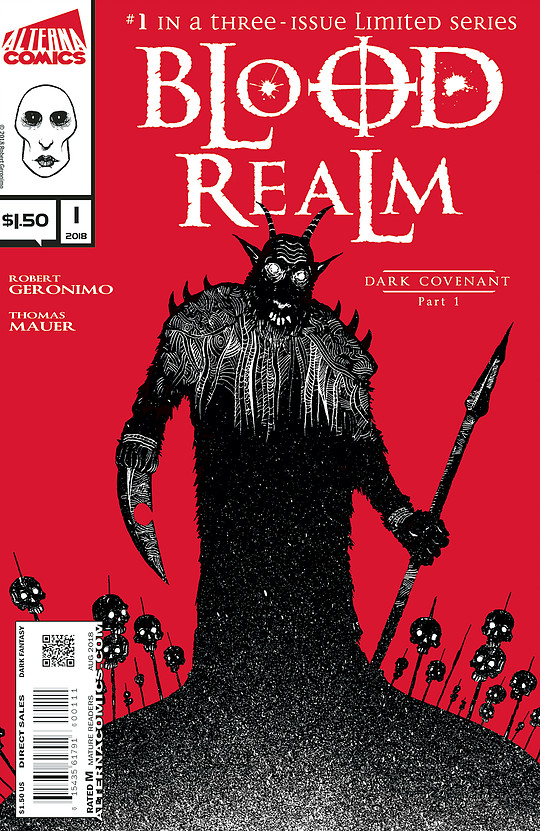 When a barbaric ruler sets his eyes on conquering the kingdom of humanity and unleashing a powerful dark force onto the lands of Mhordrin, it will take three guardians and unlike helper to prevent the destruction. Set in the lands of Mhordin, Blood Realm tells the story of mystical creatures, brave heroes, and villainous enemies bent on annihilating the peace. Voragoth, the last stronghold of humanity, has ruled the lands of Mhordrin with the superior strength of its champion army led by Captain Lycurgus. Queen Auriah, ruler of Voragoth, tasks Lycurgus with slaying ancient beings, known as the Old Beasts and collecting their blood to make a cure for the ailing Voragoth princess.

However, this curses Voragoth and begins the kingdom’s downfall. Later, a weaken Voragoth is challenged by the Saytrian kingdom, lead by the bloodthirsty General Gorn. The Saytrian are a warrior race of goat-like men and were the most feared army forces before the Voragoth had bested them. But with Lycurgus gone, and its kingdom in disarray, General Gorn, and his army have pushed further into Voragoth’s territory, laying waste to all that stand in their path. Three loyal servants to Queen Auriah, the Sisters of Silence, are on a mission to stop General Gorn and his claim to a powerful artifact that will bring eternal darkness onto Mhordin. The Sisters of Silence will venture for this artifact, finding allies and enemies throughout their journey.

The introductory issue of Blood Realm unfolds a vast story, with a large world to comprehend. The story features multiple communities and characters, covering the backstory of the Sisters of Silence mission. Writer and artist Robert Geronmino created a dark fairy tale saga that doesn’t shy away from complexity and violence. Roughly half the issue is dedicated to building the world and detailing the lore. The art style uses a combination of black, white and red to show off simple and sometimes unsettling visuals that depict ghostly cloaked figures, fierce goat warriors, and sprawling landscapes.  Comic fans that are looking for a dark fantasy tale should take a look at this three issue series. The first issue does a great job of setting the tone and introducing major characters, while interesting readers to look forward to the next issue.