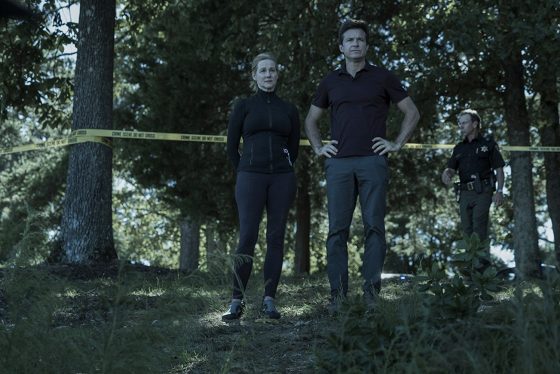 Everyone’s aware that a lot of Netflix original series are greenlit based around the almighty algorithm; Netflix sees what people are watching and liking and creates shows that play off of those habits.  Ozark seemingly took people’s love of Arrested Development and Breaking Bad and put Jason Bateman in a dark and gritty crime show but it worked spectacularly in the first season.  Bateman stars as Marty Byrde, a financial advisor in Chicago who ends up working for the Mexican drug cartels laundering money.  His partner is found out to be skimming off the top and their boss comes up from Mexico and executes Marty’s partner but Marty manages to fast talk and tells of an idea to move the operation to the Ozarks, which is ripe with tourist cash and opportunities to clean dirty drug money.  Marty uproots his whole family including wife Wendy (Laura Linney), daughter Charlotte (Sofia Hubblitz) and son Jonah (Skylar Gaertner).  Once in the Ozarks, the Brydes try to keep a low profile but become the target of local crime families and an undercover FBI agent.  Season 2 drops tomorrow (8/31) on Netflix and they’ve put out a handy recap video of the first season where antagonist Ruth Langmore (Julia Garner) brings her imprisoned father up to speed on what’s been going on. Check it out below.