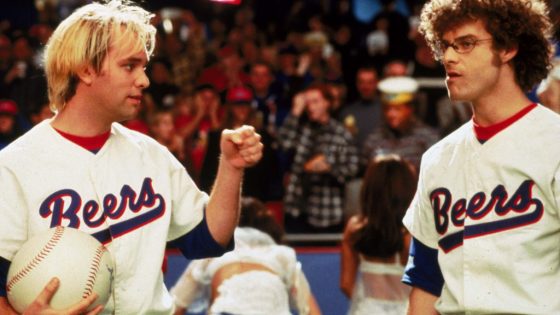 Celebrating it’s 20th anniversary earlier this summer, BASEketball was a strange beast of a comedy movie that is the only movie starring South Park’s Trey Parker and Matt Stone that they neither wrote, directed or produced.  Directed by David Zucker, of Airplane and Naked Gun fame, the movie follows Parker and Stone as slacker best friends Coop and Doug who invent the titular game of BASEketball, a crazy hybrid of baseball and basketball whose main gimmick and strategy is trying to distract the other team and cause them to miss shots and lose points that becomes a nationwide phenomenon.  Coop and Doug play for the Milwaukee Beers and their in-stadium band is Reel Big Fish, who play a number of their songs during the movie and also a cover of a-ha’s “Take on Me”.  The song was released as a single and had a music video where Reel Big Fish played down the corridors of the BASEketball stadium and eventually played the game themselves while clips from the movie were intercut but, for some reason, that version is nowhere to be found on YouTube and instead it’s only the international version, which cuts all the BASEketball clips and references out.  Check it out below but there’s a bonus clip of Reel Big Fish from the movie as well.