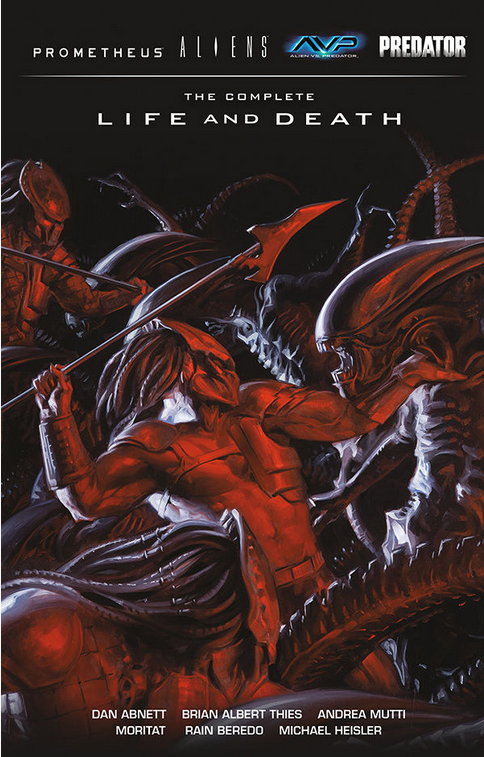 When a hostile threat forces enemies to fight for survival; Humans, Yautjas, Xenomorphs, and Engineers will face off in an epic adventure. Following the events of Fire and Stone, the Life and Death saga crosses over four series to tell another galactic, action pack story. This hardcover collection brings the connecting storyline from all of the Alien and Predator comic franchises: Aliens, Predator, Prometheus, and AVP. Each comic set tells a chapter in the five chapters of the Life and Death saga. Set sometime later after the Fire and Stone, a new crew has discovered an Engineer ship on a new undiscovered planet, but this draws the attention of the Predators and eventually the vicious claws of the xenomorphs. Another failed expedition would to new discoveries and bloody encounter, turning foes into allies and a true fight for life and death for all species. 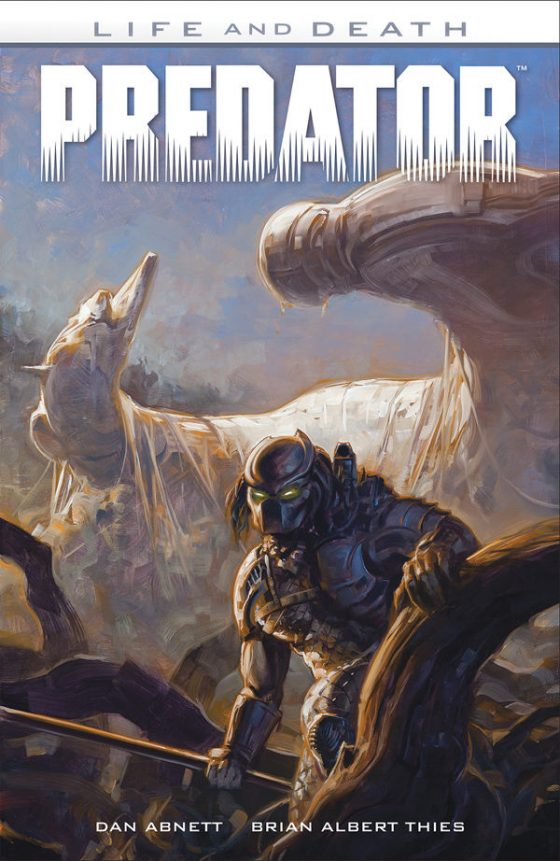 Predators: Live and Death –  written by Dan Abnett and illustrations by Brian Albert Thies. A new group of soldiers and scientist have found an Engineer Ship containing on a remote planet LV-797. Aboard the combat ship Hasdrubal, Captain Paget oversees the operations that will bring marines and scientists to the planet.  A group of Colonial Marines prepare to retrieve the unknown alien ship, the hidden guardians of the planet, a clan of Predators, reveal themselves and begin their hunt on the humans. 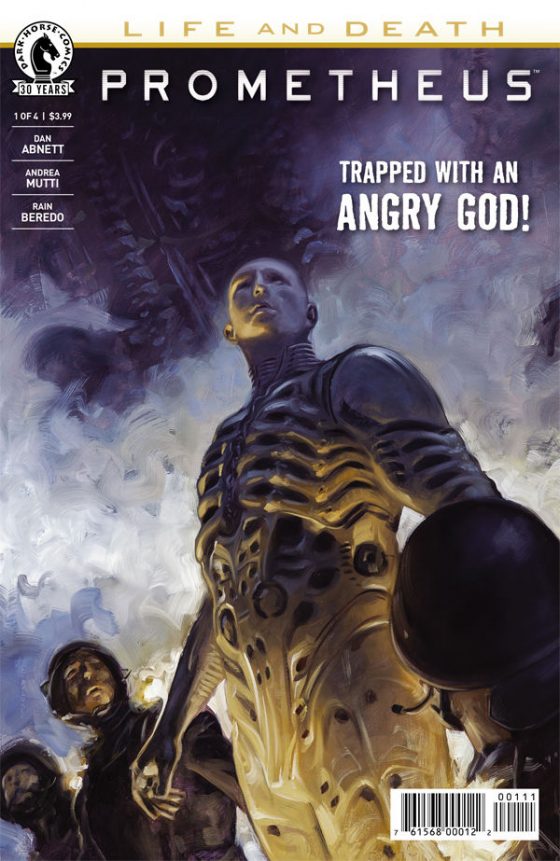 Prometheus: Live and Death –  written by Dan Abnett and illustrations by Andrea Mutti. A squad of Colonial Marines managed to climb aboard an Engineer’s ship before it had departed LV-797 during the Predators attack. Cut off from communications from Captain Paget and the Hasdrubal, the marines hold off an awoken Engineer while it sets a course for LV-223. 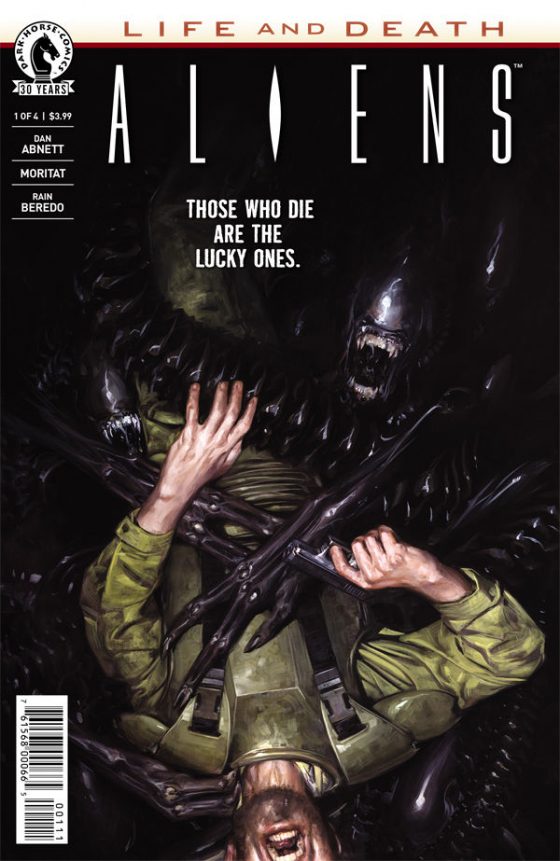 Aliens: Live and Death –  written by Dan Abnett and illustrations by Moritat. The Engineer’s ship has landed on LV-223, allowing the surviving Colonial Marines to escape and hide in the strange landscapes. Unnoticed by the soldiers are hordes of deadly Xenomorphs that quickly pounce on their new prey. But help comes from the survivors of the second expedition to LV-223. Survivors Captain Angela, Galgo, Jill, and Chris have lived on with their Predator ally, Ahab, forfeiting their defenses and waiting for a chance to get off the planet. The Colonial Marines, the survivors, and a lone Predator battle for survival against the massive hive of the Xenomorphs. 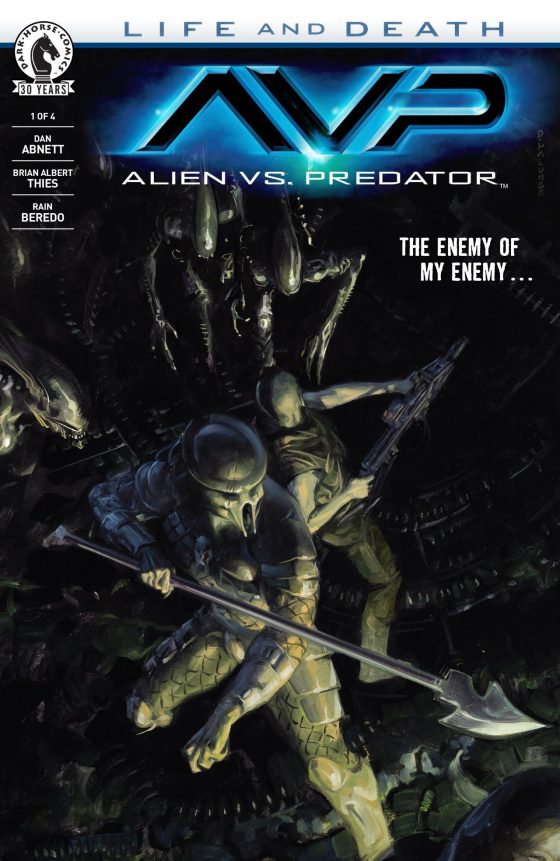 AVP: Live and Death –  written by Dan Abnett and illustrations by Brian Albert Thies. The lone Enigeer has awakened another Enigeer in cryosleep. The two Engineers begin plans to arm a spaceship to attack a target from long ago, Earth. While the remaining Colonial Marines and Captain Angela make a plan to sneak aboard the Engineer’s ship, Galgo and Ahab act as a distraction to draw off the Enigeers. But everything gets interrupted when the Xenomorphs seeks a new host for their queen and a Yautja clan follows a trail for a big prize hunt. 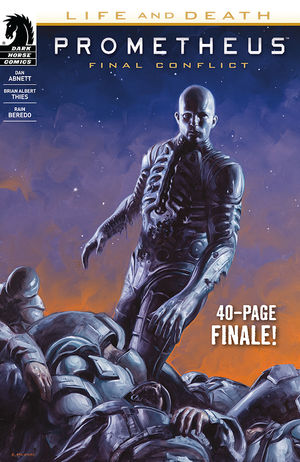 Prometheus: Live and Death –  written by Dan Abnett and illustrations by Brian Albert Thies. The remaining humans have teamed up with the Yautjas to fend off the Xenomorphs from calming their queen host. But waiting for a chance to strike, the Engineers have come to kill all the remaining survivors and resume their plan to wipe out humanity.

Dan Abnett does an excellent job of connecting the storyline of Fire and Stone and bringing a thrilling and exciting tale that explores more of the Aliens and Predator lore. Every artist in the Life and Death puts unique interruptions of the style and characters, emphasize realism or cartoony elements in the story. But when it is time for action sequences, the guns and blades don’t get a break. The Colonial Marines are tough soldiers but face their greatest challenge taking on the Yautja and Xenomorphs. The deadly skills of the Yautja and the relentless might of the Xenomorphs cut down the Colonial Marines in brutal and vicious ways. Life and Death is a grand sci-fi adventure with a thrilling story and plenty of intense action. Comic fans looking for more exciting tales with their favorite deadly aliens shouldn’t miss out on this collection.